The latest figures on how many solar pv installations have been installed across the country was released recently by the Department for Business, Energy and Industrial Strategy (BEIS).

As expected, the COVID-19 pandemic has had an effect with installation figures down 74% on the same period last year.

The total installed capacity of solar PV in the UK currently stands at 13,493MW with 45% (6,069MW) being provided by just 466 large scale installations.  Residential systems account for over 92% of the 1,034,993 registered installations but total only 2,716MW of capacity.

This comes after recent analysis of the data showed that Peterborough has led the way with the most solar PV being installed of any town in the UK.  Over 11% of households in Peterborough have installed a solar PV array, over 9,000 properties.

The study of 371 local authorities across the UK found that 19 of the 20 worst performing authorities were in London, Chelsea and Kensington coming bottom of the list with just 0.16% of households taking up the green incentives.  Of almost 80,000 households in the borough, only 127 have installed a solar PV array.

Only 3 other towns across the East of England feature in the top 20 with Colchester in 6th position, Kings Lynn in 19th and Maldon in 20th place.

There has never been a better time to install your own solar array with a 4kW system able to provide savings of up to £260 per year from your home electricity bill.

Get in touch with our specialist in-house team to find out how SaveMoneyCutCarbon could help you. 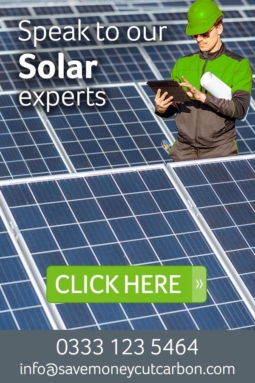