Two influential reports this week underline the wider benefits of energy efficiency that should be central to any national energy strategy.

The International Energy Agency (IEA) report and the Eurobarometer survey show that energy efficiency goes beyond standard financial metrics, which are clearly crucial but do not provide the full picture of what can be achieved. 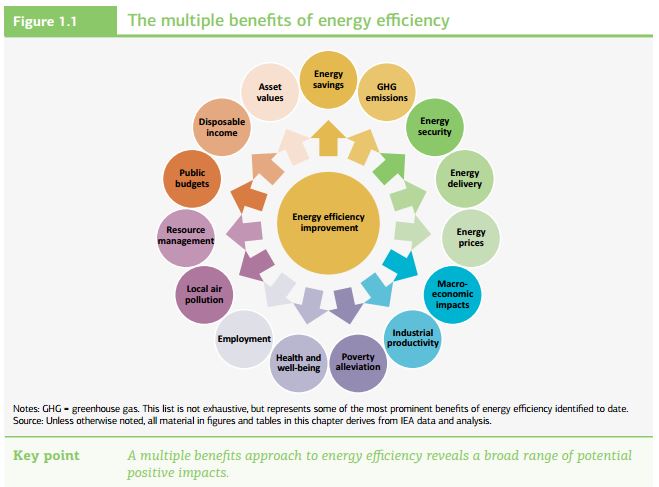 First up, the IEA launched Capturing the Multiple Benefits of Energy Efficiency, at the International Energy Policy Evaluation Conference in Berlin, which argues that the traditional focus on energy savings as the main goal of energy efficiency policy has produced unwelcome downsides.

These include an underestimation of the full value of energy efficiency in national and global economies, and this value or “hidden fuel” can boost economy, tackle poverty, and address climate risks.

The report’s authors say that energy efficiency can bring multiple benefits, such as:

For example, when the value of multiple benefits is calculated alongside traditional benefits of energy demand and greenhouse gas emissions reductions, investments in energy efficiency measures have delivered returns as high as four US dollars for every one US dollar invested.

IEA Executive Director Maria van der Hoeven says: “This report lays out the case for governments to invest more time in measuring the impacts of energy efficiency policies, to improve understanding of their role in boosting economic and social development and to facilitate policy design that maximises the benefits prioritised by each country. By adopting the multiple benefits approach advocated by the IEA in this study, governments can help unlock the potential of energy efficiency.”

Recognition of the wider benefits should be a spur to necessary investment because when the value of productivity and operational benefits to industrial companies are included in traditional internal rate of return calculations, payback periods for energy efficiency measures are more than halved from an average of 4.2 years to just 1.9 years, so positioning them below the threshold demanded by many finance departments.

Meanwhile, an EU focused report, the latest Eurobarometer survey on the environment, shows that a big majority believe that the efficient use of natural resources (79 %) and the protection of the environment (74 %) can boost economic growth. Four of five EU citizens consider that the economy influences their quality of life, while three-quarters think the state of the environment has a similar impact and around the same (77 %) believe that environmental problems have a direct effect on their daily lives.

Compared with the previous barometer of three years ago, more people (75 %) say they are ready to buy environmentally-friendly products, even if it means paying a little more. A vast majority (93 %) think that big polluters should make good the environmental damage they cause. Introducing heavier fines for offenders was deemed the most effective way of tackling environmental problems.

At the same time, 85 % of Europeans believe they have a role to play in protecting the environment. Most are adopting environmentally-friendly actions and behaviour. Separation of waste for recycling (72 %), cutting down energy consumption (52 %) and cutting down water consumption (37 %) were the three most common activities.

Clearly, the mood for effective, comprehensive strategies to combat threats to the pocket and the planet have not diminished during the tough economic times. Indeed, they seem to have helped refocus and widen the scope for effective strategies.