The UK designer of a bioplastic made from fish waste has won this year’s International James Dyson Award.

Lucy Hughes developed a biodegradable and compostable material that breaks down in four to six weeks as part of her final-year project for the product design course at the University of Sussex.

The 23-year-old designer wanted to find ways to help reduce environmentally harmful single-use plastics as well as methods to cut fish waste, aiming to create a product that would have an environmental benefit.

“I didn’t want to use virgin natural materials so I challenged myself with starting with a waste stream. For me a good design is something that bridges the gap between behaviours, business and our planet.”

Unlike some biodegradable plastics, the bio-material would not require the establishment of a separate waste collection infrastructure for its disposal. 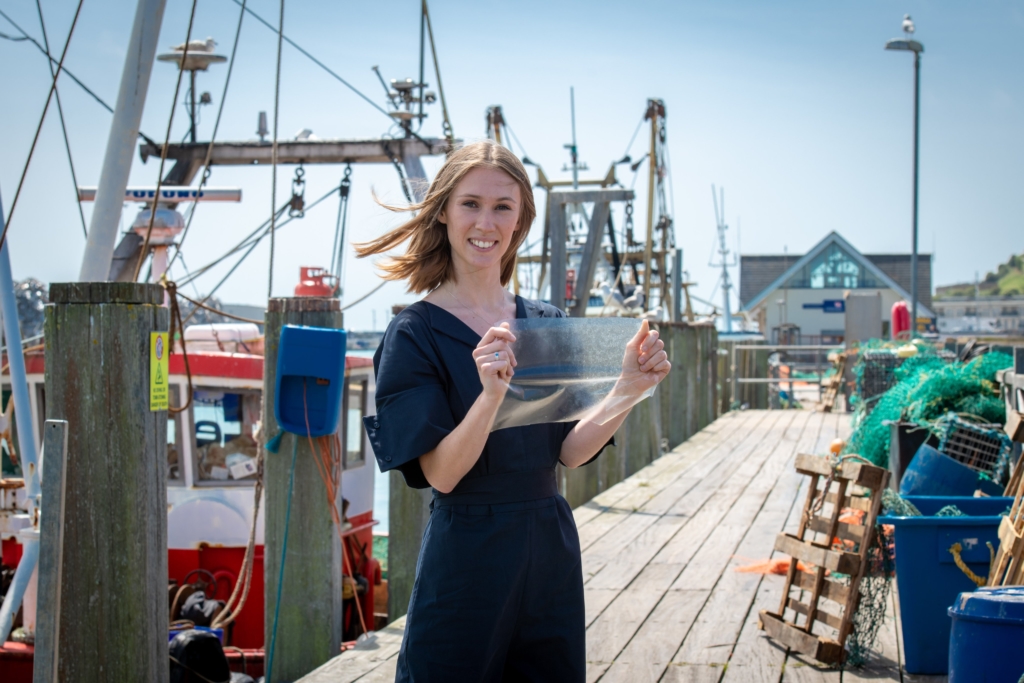 Current UK estimates are that people use around 5 million tonnes of plastic annually and half of that is packaging. The problem is magnified by the fact that only 51% of local councils in England have separate food waste collections with the majority of bio and compostable plastics not best suited to existing waste treatment infrastructures.

Around 492,020 tonnes of fish waste is produced in the UK annually by the fish processing industry but it has low commercial value. The offal, blood, fish skin and scales as well as crustacean and shellfish exoskeletons end up in landfill or are incinerated.

The UN estimates that around 50 million tonnes is produced each year worldwide.

Hughes’s material, called MarinaTex, can also be disposed of safely through home food waste collections and is even edible!

MarinaTex is both strong and transparent so it can be used to replace conventional plastic across the broadest range of uses. Its rapid decomposition is in sharp contrast to the standard single-use plastics that take centuries to break down fully.

Hughes carried out research around the Sussex coast and found that the flexibility and strength-enabling proteins of fish skins and scales were the most promising sources for the plastic alternative. Her data showed that a single Atlantic cod could generate the organic waste needed for 1,400 bags of MarinaTex.

“When I felt the skins and the scales in my hands, I could see that there was potential locked up in it. It was so flexible, yet pliable and strong.”

She added chitosan molecules from crustaceans, like crabs and lobsters, to the fish scales and skin mixture, as well as using red algae to bind the proteins.

This created strong overlapping bonds in a translucent and flexible sheet material that looks and feels like plastic but is stronger, safer and much more sustainable than the traditional oil-based option.

She carried out more than 100 experiments – most on the kitchen stove in her student accommodation – to refine the bioplastic mixture.

“Plastic is an amazing material, and as a result we have become too reliant on it as designers and engineers. It makes no sense to me that we’re using plastic, an incredibly durable material, for products that have a life cycle of less than a day.

“For me, MarinaTex represents a commitment to material innovation and selection by incorporating sustainable, local and circular values into design. As creators, we should not limit ourselves to designing to just form and function, but rather form, function and footprint.”

The Dyson International Award prize is worth £30,000 and that is added to the £2,000 Lucy won in the UK category earlier in the year. Her department at Sussex also gets £5,000.

She plans to use the prize money to further develop the product and prepare for mass production.

The Dyson Award operates in 27 countries, and is open to university students and recent graduates studying product design, industrial design and engineering. It recognises and rewards imaginative design solutions to global problems.

This year’s runners-up were an AI-enabled wearable device to help monitor asthmatic symptoms and predict triggers, designed by Anna Bernbaum, of the Dyson School of Engineering in London, and solar panels which can be draped over backpacks or tents, invented by Bradley Brister, of Brunel University London.