Government data reveals that burning solid fuels like coal and wood in our homes is the biggest contributor of harmful particulate matter (PM) emissions. In its Clean Air Strategy it says that these emissions make up 38% of our total PM emissions, compared to only 16% from industrial combustion and 12% through transport.

Wood burning stoves have pros and cons – and there are most definitely options and ways you can reduce the harmful effects and boost sustainability.

What is wet wood?

Wet wood (also known as green wood) is a type of fuel that comes in the form of undried logs, with a moisture content of at least 20%, used for burning in stoves and fireplaces. Roughly 2.5 million homes in the UK rely on this fuel or coal for heating.

Why is wet wood bad for the environment?

When burned, the damp wood releases far more PM than dry wood. As these tiny particles are thinner than a strand of hair, they’re able to penetrate deep into your body. This is extremely harmful to your health, increasing the risk of lung and heart disease. A study by Greenpeace and The Guardian discovered that nearly 50,000 children across the UK are exposed to dangerous levels of air pollution. So, it’s a huge health and sustainability crisis – but one that we can do something about. 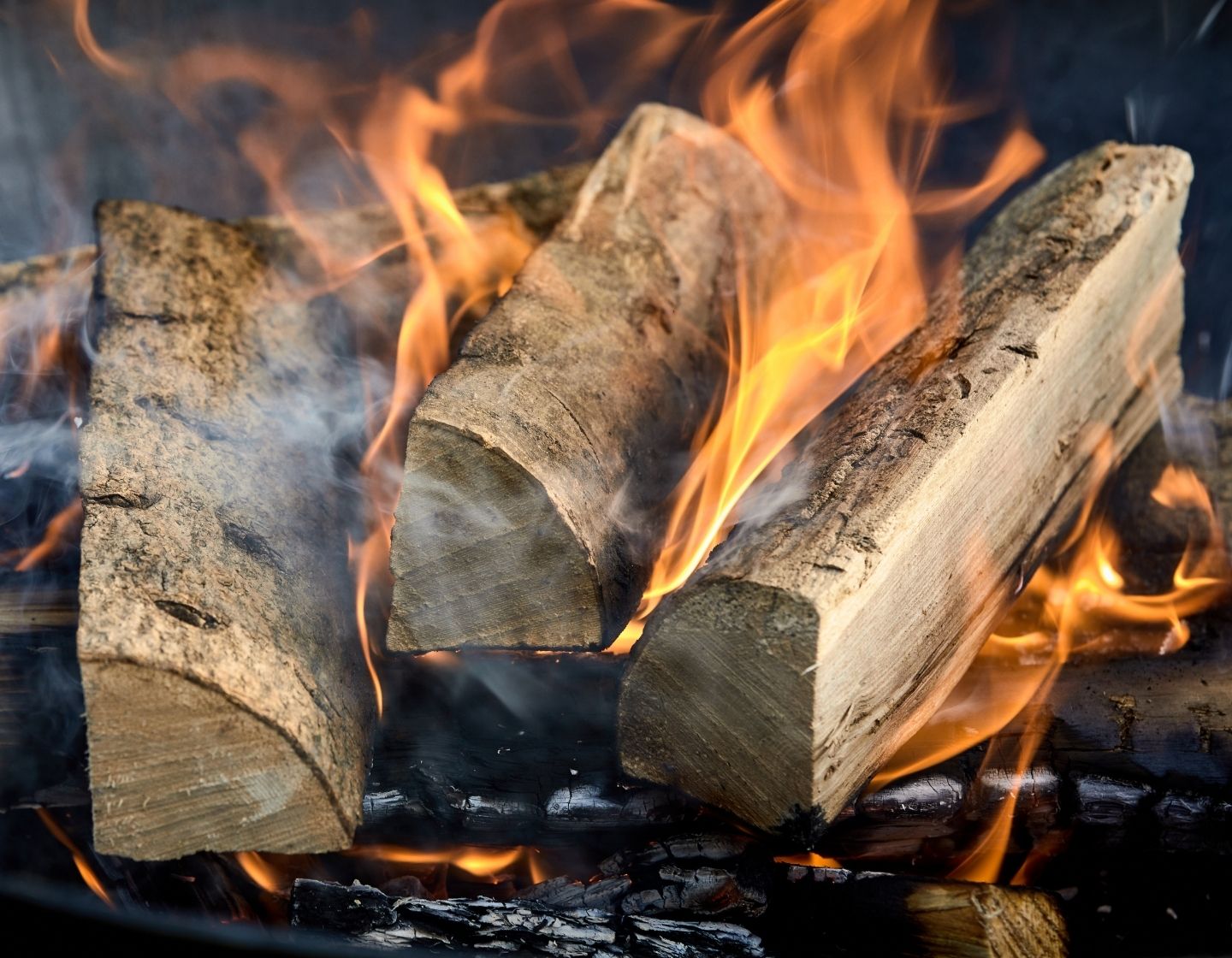 Are wood burning stoves bad for the environment?

Wood burning stoves are the closest alternative to a traditional open fire. They can keep your whole house warm (between 60% and 80% eﬃciency), and often create an interesting aesthetic to your home. Although many people believe that they’re sustainable as they use renewable energy rather than fossil fuels, there are a lot of environmental factors to consider.

Wood burning stoves are particularly bad in an urban location because the CO2 released will not be absorbed because of a lack of trees. According to King’s College London, wood burning accounts for 31% of the capital’s PM pollution and overall London has 50% higher exposure to PM than the World Health Organisation guidelines permit. However, if you live in the countryside and buy your wood locally, it’s far more sustainable. 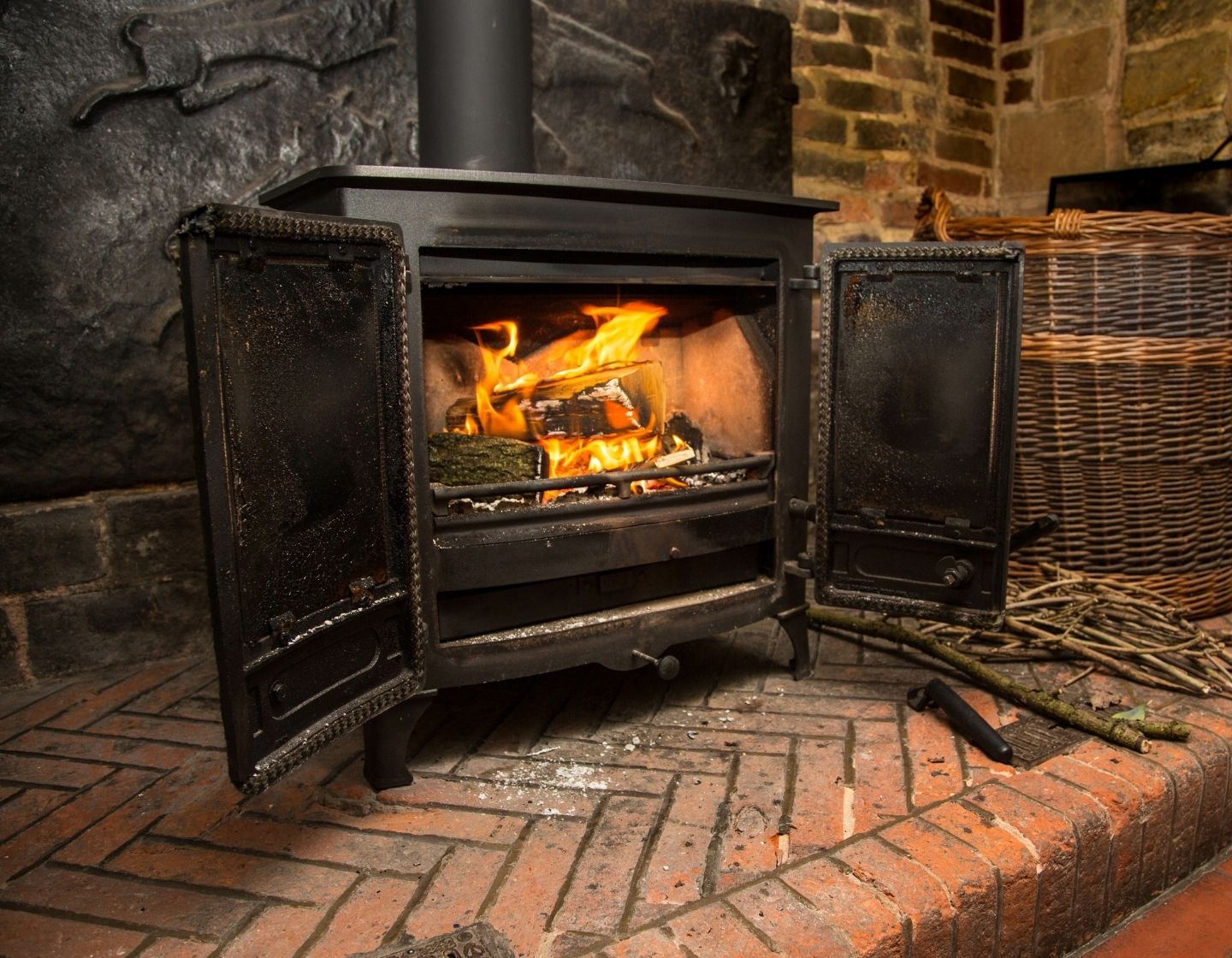 What are eco-friendly alternatives?

Although many people enjoy wood burning stoves for their comfort and warm atmosphere, there are three main alternatives on the market that improve sustainability without damaging health or climate.

Bioethanol is a renewable fuel that comes from the fermenting sugar process. The colourless fuel doesn’t release any smoke, ash or soot so there’s no chance of respiratory disease.

They’re also efficient, able to heat the whole house with little cost. According to imaginfires, a bio fire specialist, a typical bioethanol fire only uses 200ml of fuel per hour to create 3kW of heat, costing roughly 50p per hour, whereas a wood burner stove is estimated to cost £2.14 an hour. The upfront cost of a bioethanol fireplace is far cheaper too, around £150 to £700 compared to a wood burner than can cost upwards of £700. Additionally, bioethanol fireplaces require no installation or maintenance costs.

According to Which? electric fires are very efficient, and eco-friendly if they use renewable energy, and all the heat radiates into the room rather than up the chimney. You also don’t have to worry about health issues as there are no fumes and they’re easy to install, fairly cheap and require little maintenance.

However, they are not so pleasing to the eye and won’t release as much heat as a real fire (only 2kW or less). They also use more energy, increasing your carbon footprint and energy bills.

Gas fires are up to 90% eﬃcient, providing 6kW of heat. They don’t require much energy to run so they’re far cheaper than electric fires, and they don’t produce any smoke. But they do burn fossil fuels so they’re not as sustainable as electric or bioethanol fireplaces. Furthermore, you’ll need a professional to install your fireplace and you’ll have to get it serviced annually, which can be costly. You’ll also need to purchase a carbon monoxide detector to detect any gas leaks.

So, there are a range of options and the best choice for you will depend on what you can afford, how sustainable you want it to be, how much space you have and how realistic you want it to appear. 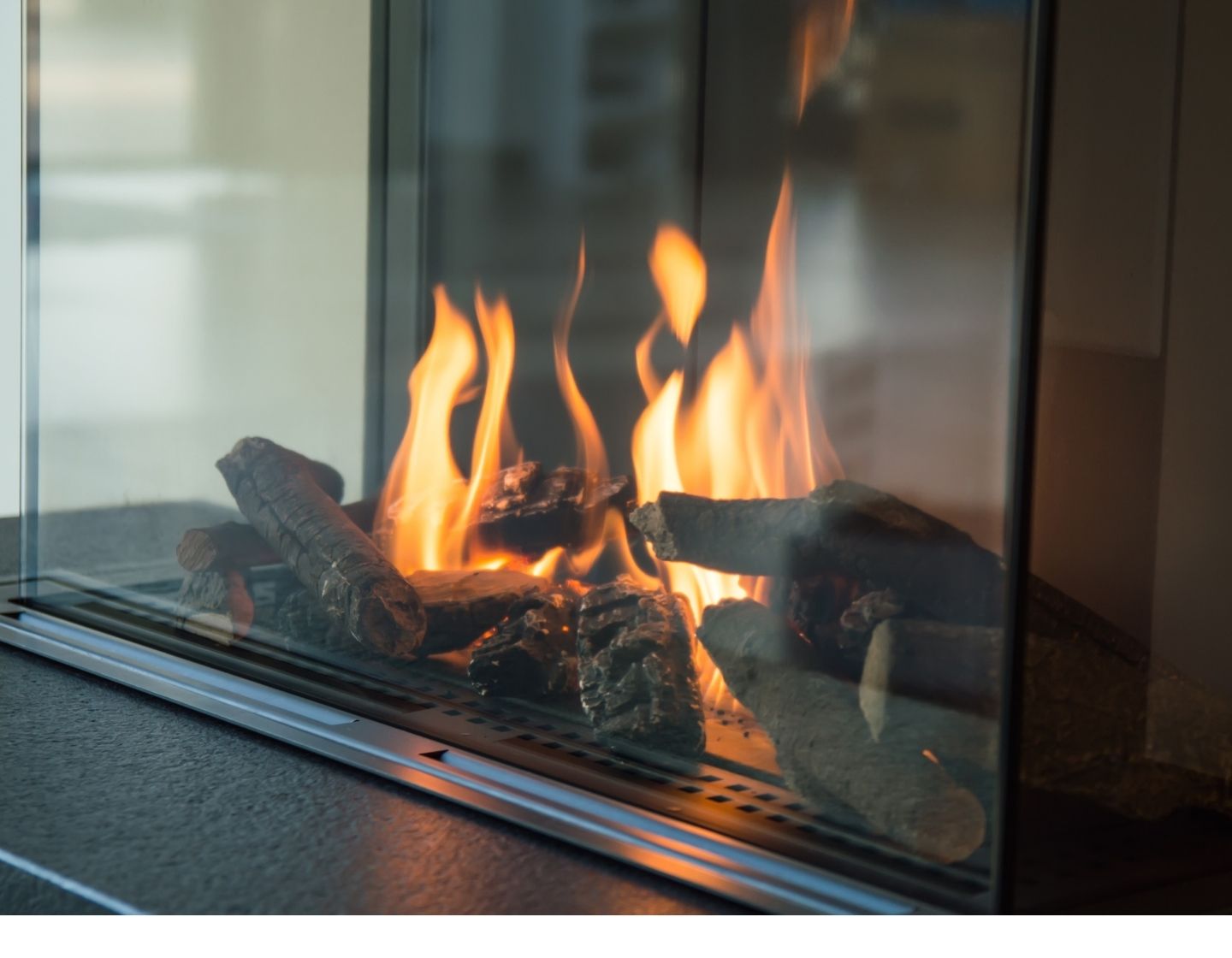 How to make your wood burning stove better for the environment?

Just 8% of the UK population make up the emissions released by burning wood indoors. The Guardian found that half of those people preferred this method for aesthetic reasons rather than functional (heat) purposes. In response, Asthma UK and the British Lung Foundation urged people to only use wood burners if they had no alternative source of heat. If that’s the case, there are some things you can do to increase the safety of your household and protect the environment.

Use your wood burning stove efficiently, so only when you really need it. You don’t need to release any more heat or emissions than you need to temporarily heat your home, so once it is warm enough, stop feeding the stove.

Ensure it is well maintained by cleaning it regularly by removing any ash or soot. If your chimney is not clean and overloaded with soot, smoke will escape into your home instead.

Use eco-friendly products like our FireUp sustainable firelighters. They’re 100% carbon neutral, fossil fuel free and non-toxic, which means they’re safe to use both indoors, outdoors and around food (so also no need to fret this summer when you’re hosting a family BBQ!)

Stick to dry wood, which is environmentally friendly and safer to use. Although kiln-dried logs are more expensive, they burn more efficiently and cleanly. With the new legislation, households will be burning less polluting fuels, creating a safer and healthier environment. When buying wood, look out for the ‘Ready to Burn’ logo that shows the wood is dry and has a moisture content of no more than 20%. When possible (especially if you live in the countryside) source your wood locally to reduce the pollution caused by transportation.

You can also buy efficient wood burning stoves that release minimum emissions. According to Ecodesign Regulations, only stoves that have been tested and meet the new guidelines will be legal to sell and install in the UK. 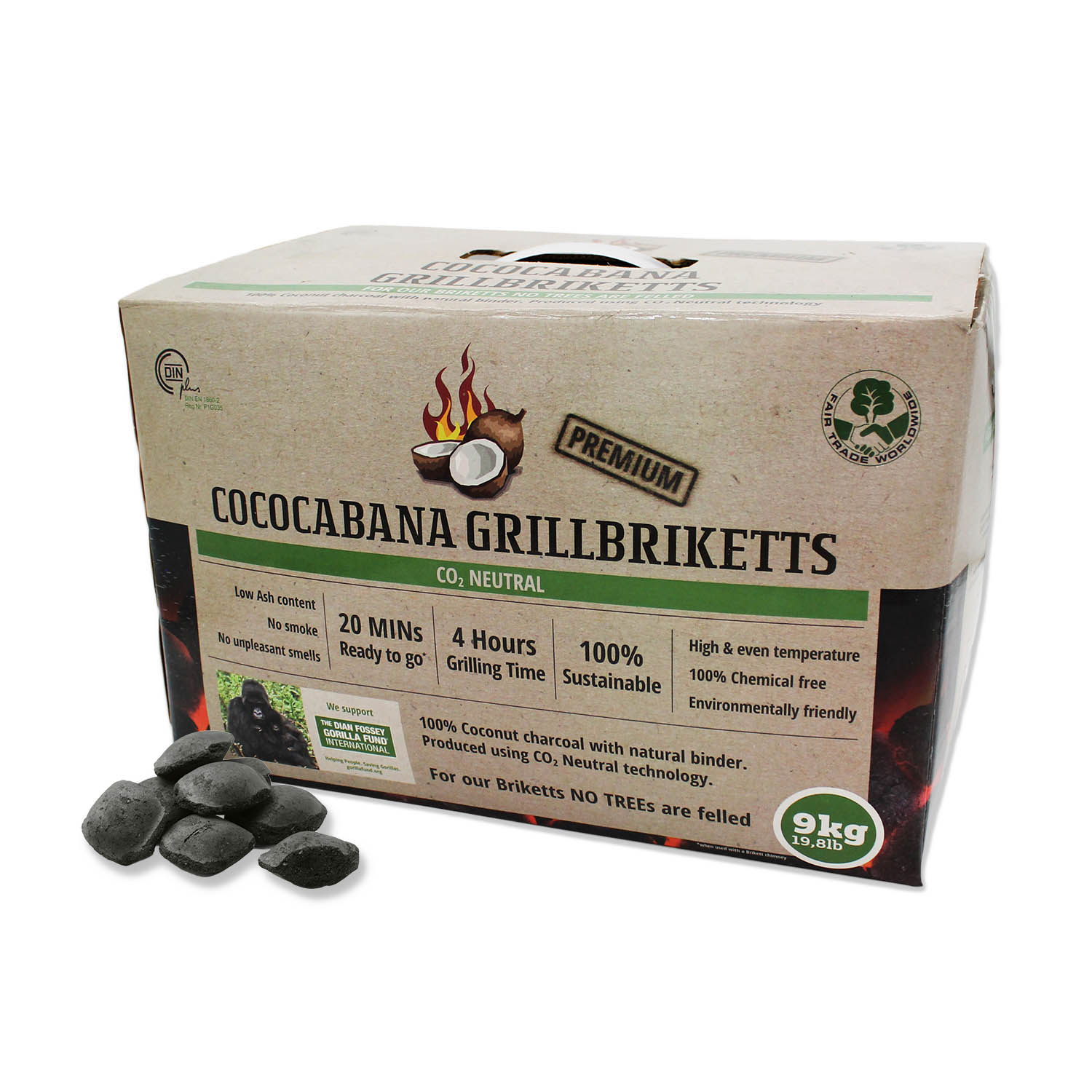 Are outdoor fires bad for the environment?

Chimineas and fire pits can be an eco-friendly source of heat for those cooler summer evenings. Our CoCoCabana Grillbrisketts are the perfect alternative to traditional charcoal, with loads of environmental benefits.

The production process is 100% carbon neutral. They’re made using coconut husk, a by-product of the coconut farming industry. By using a by-product that would have been wasted, greenhouse gas emissions are reduced. The production process also generates renewable energy by harnessing gases released. Plus, it prevents deforestation for logs and enhances the income and welfare of coconut farmers.

Ideal for outdoor fire pits and BBQ’s, we love the CoCoCabana Grillbrisketts because they’re reusable and efficient. Just 3kg will last for up to six hours, which is three times longer than traditional charcoal. After you’re done, you don’t have to dispose of the briquette either, only the ash that it has produced, which you can use as garden fertiliser once it has cooled.

Upgrade your BBQ this summer and stick to our sustainable alternatives to keep you safe, and the environment happy. 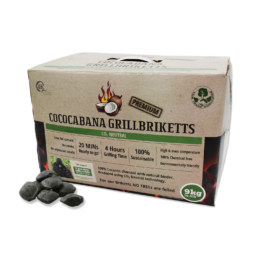 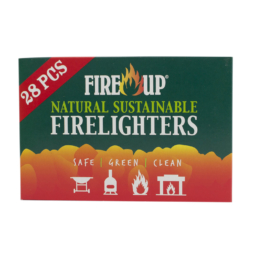 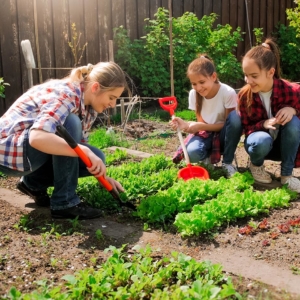 Make a difference, be more sustainable in your garden