My monthly direct debit payment has been cut by Anglian Water, which will save me around £85 a year – and all it took was a few very simple steps that have not only paid for themselves but will go on saving us money month after month.

Our three-bedroom home is a newbuild which had some water efficient fittings when we moved there in June 2012 , although to be honest, we were not really aware at the time how effective the hansgrohe EcoSmart taps and showers were in reducing water use.

But after joining the SaveMoneyCutCarbon team, I learned so much about how hansgrohe and other quality products are built brilliantly to reduce water consumption. The EcoSmart technology is very impressive, deceptively simple and has few rivals.

Even in a new build home, there are simple ways to make sure you keep bills to a minimum and we focused on water consumption first of all with the simplest of changes.

About a year ago, I replaced the tap aerators in the three basins in the two bathrooms and cloakroom. Previously, the taps were running at 5 litres per minute but we reduced the flow to 3.5 lpm with a really simple, 10-minute changeover.

I did not want to waste my time with one of the many “pound-a-penny” flow restrictors out there on the market, opting for quality tap aerators from NEOPERL, which are amazing mini miracles, from a company that spends millions of pounds a year in research and development. 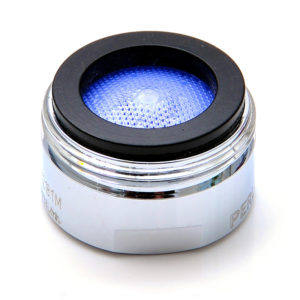 The tap aerators are very easy to keep clean and keep the flow straight. A light rub each week when cleaning removes any limescale build up – the NEOPERL Smart Lime Cleaning (SLC ) silicon heads are really effective.

And the 3.5 lpm flow is excellent for washing hands and brushing teeth with the aerated flow soft and splash free.

Then around seven months ago we replaced the factory-fitted kitchen tap, which was heavy on water use and we found that we could not fit a tap aerator to it. The new kitchen tap is a hansgrohe Talis S Variarc and I swapped out the standard tap aerator for one that manages a 7 lpm flow.

Quite apart from the water savings, the Talis S is a really nice modern single lever design. Interesting to note that the newer homes being built by our housebuilder, Crest, seem to have this as standard now!

While we are metered for our water use, you don’t really realise your potential savings until the yearly bill arrives, which in my case was last week. Not only am I in credit with Anglian Water, but my monthly DD is looking even healthier. At just £23.

While I was already saving money with the hansgrohe EcoSmart shower heads without being in a position to measure that, I am really impressed by the way a few simple changes can bring real, tangible savings.

What’s also great is that we’ll go on saving year after year as these products are built to last a very long time.

I’m here with the SaveMoneyCutCarbon team to help so give us a call on 0845 123 5464 to discuss the best ways to cut your water and energy consumption – and start saving now.