Water bills across the country rise again today by an average 2 per cent, marking a 65 per cent rise over the past 10 years.

The National Audit Office has warned that water bills could rise by 28 per cent by the end of the next decade.

Time now, then, to seriously consider cost-effective, sustainable ways to cut water consumption both at home and at work.

Agreed, the rise is nowhere near as shocking as the average 9 per cent energy bill hikes of last November but shows the insistent drip, drip, drip of pressure on households and business costs.

Bear in mind, too, that despite the deluge and suffering faced by many in the recent flooding, the changing climate and inefficient management of storage and supply means that water will become an increasingly costly, even precious, resource.

Add to this the inexorable spread of water metering. While water meters might benefit single people living alone, for most households, the indications are that water costs rise substantially. As the Telegraph warns, some family water bills could double.

And it’s often forgotten that by cutting water consumption, you cut your energy bills – reducing the flow means using less energy to heat the water for showers and taps.

One of the biggest water guzzlers in the home is the shower and simply by swapping out the old shower head and investing in an eco shower head, households can reduce their water consumption there by more than 50 per cent.

We trust quality at SaveMoneyCutCarbon but also believe in offering the best prices in the UK on hansgrohe products. If you are looking to cut your water consumption, which is also good for the planet, you’ll find a great range of hansgrohe eco shower heads to fit most budgets, as well as shower hoses and accessories.

For example, we have the hansgrohe Crometta 85 Green 1Jet EcoSmart Hand Held Shower Head, one of our most popular models. 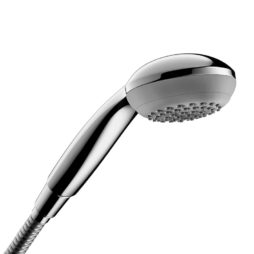 You might decide to replace your current taps with eco models that again more than halve water consumption, while reducing your carbon footprint (CO2 emissions) by a substantial, sustainable amount every year.

Even if the tap change is not top of your money-saving “To-Do” list, you can reduce your water use with simple, easy-to-install tap aerators, fitting most tap models. You can check whether your tap suits with our handy guide.