You are here: SaveMoneyCutCarbonLearn&Save – OverviewTrials to test recharging cars ‘on the go’
Compare Products

The UK is to test whether electric and hybrid cars can be recharged “on the go” while driving. 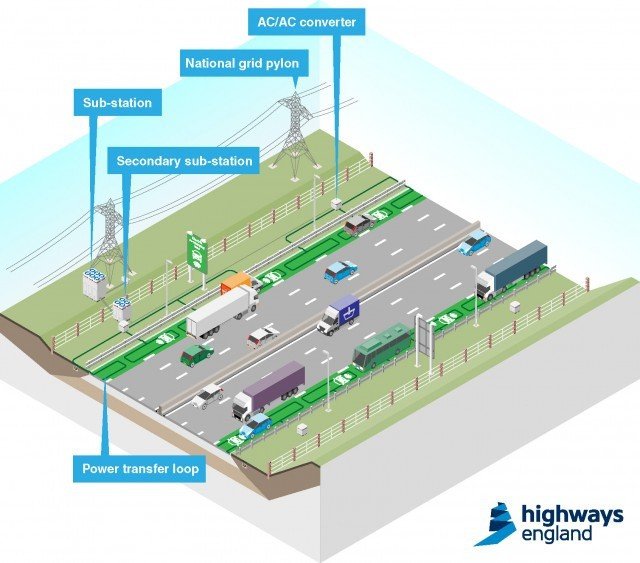 Highways England has commissioned off-road trials over the next 18 months into “dynamic wireless power transfer” technologies. If successful, the technologies could be tested on real roads with a goal to provide “as you drive” power on motorways and A roads.

The decision was made after a feasibility study gave a cautious but positive review of the potential for Wireless Power Transfer (WPT) that would enable charging lanes to be constructed on major roads.

The trials, first of their kind, are testing very young technology that is not yet commercially available and would, if successful, mean that WPT-enabled vehicles could be driven for long distances without the need to stop at a recharging station.

Currently, many electric vehicles can be driven for anything between 100-250 miles before needing a recharge so the facility to recharge on the move would be a boon, particularly for the commercial sector.

The trials will use equipment that sits underneath road surfaces and will replicate major road conditions with wireless charging technology fitted to a range of vehicles. Electric cables under the trial roads will generate electromagnetic fields, picked up by the wireless receiver coil and converted to electricity.

According to a report on Mashable, a 7.5-mile (12 km) stretch of road in South Korea charges electric buses as they drive along, through a process called Shaped Magnetic Field in Resonance (SMFIR). And a trial in Milton Keynes saw buses charged wirelessly through plates in the road, but they had to stop moving.

Transport Minister Andrew Jones advises: “The potential to recharge low emission vehicles on the move offers exciting possibilities. The government is already committing £500 million over the next five years to keep Britain at the forefront of this technology, which will help boost jobs and growth in the sector.

However, the scheme has its detractors. Dr Paul Nieuwenhuis, director of Cardiff Business School’s Electric Vehicle Centre of Excellence told the BBC that while the technology worked and was worth trialling, cost would be a big issue.

Dr Nieuhuis advised: “Battery technology is increasing – if you look at what Tesla has achieved in recent years, it keeps adding more [travel] range to battery technology roughly every six months. So, it’s not clear there’s even a need for this.”