The rise of electric vehicles in the UK seems unstoppable with EV market share overtaking diesel models for the first time this year. Car buyers are deserting the diesel in droves, with a 51% annual drop in sales of those fossil-fuel vehicles. There were 38,025 diesel car sales in the year to May, while dealers sold 95,512 Battery Electric Vehicles (BEVs), an increase of 71.2% over the same period. While diesel’s market share is now 5.8%, BEV is 14%, nearly double that of last year.

The cool parent in the drop off queue on the school run is no longer in the Range Rover or Crossover SUV, they are driving an EV.

If you are looking at switching your family car over to an EV in 2022 the industry has now given you a few more options that meet requirements – 7 seaters are now available, minivans are coming soon, and most EVs have loads of cargo space on tap. There are also now even more places to charge.

With the increased capacity in the public charging network, the public perceptions around charging anxiety are now starting to dissipate. As of this August, there are over 56,000 connection points available at 20,000+ locations, with around 1,595 new sockets being added in July alone.

So what options are there for the sustainably living family? I have picked 10 of my favourites below:

The EV6 is Kia’s first fully electric crossover designed purely as an EV. The EV6 has set the bar high for Kia, and WhatCar magazine seems to agree, making it the Car of the Year for 2022. The EV6 is available in RWD and AWD formats, and a GT Line performance model is expected in 2023. The EV6 is also a great vehicle for those long family road trips, with its 233kW DC charging capability, its capable of charging for 20% to 80% battery in just 16 minutes. The EV6 also boasts a towing capacity of 1,600kg which should meet the demand for 2-4 berth caravans, as well as pulling a small trailer. The EV6 also has a special party trick called V2L (Vehicle to Load), this basically turns the EV6 into a portable power supply, V2L offers 3.6kW of electricity, which can be used to power camping equipment, power tools, a movie projector and you can even charge other electric vehicles. Kia have also built this with sustainability at heart as the interior is made out of recycled plastics and vegan leather. 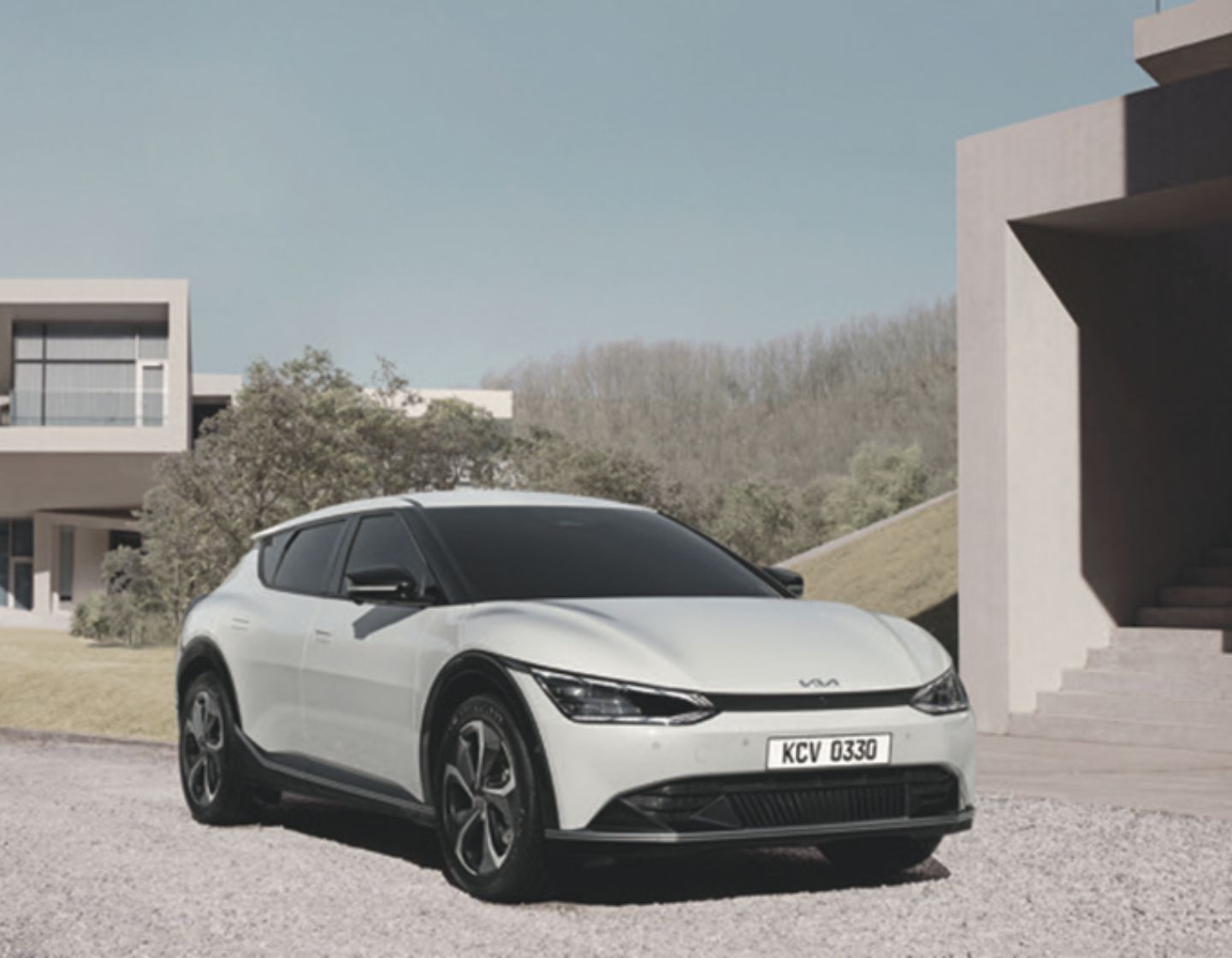 The Mercedes EQB is set to be quite a popular car as it offers 7 seats. Lots of families have got used to 7-seater electric vehicles since the 90’s minivan arrival, but so far they are quite rare in the EV world, unless you are interested in buying an electric van or spending £100,000 plus on a Model X or EQS SUV. The EQB offers up to 253 miles of range from its 70kWh battery which drives all four wheels. DC Charging capability is 113kW, meaning you can go from 20 to 80% battery in around 29 minutes. As you would expect from a Mercedes, the specification level is high with a 10.25 inch display screen, Apple Carplay, wireless charging as well as hands-free boot opening. With the seats folded down you also have access to 1,710 litres of load space. 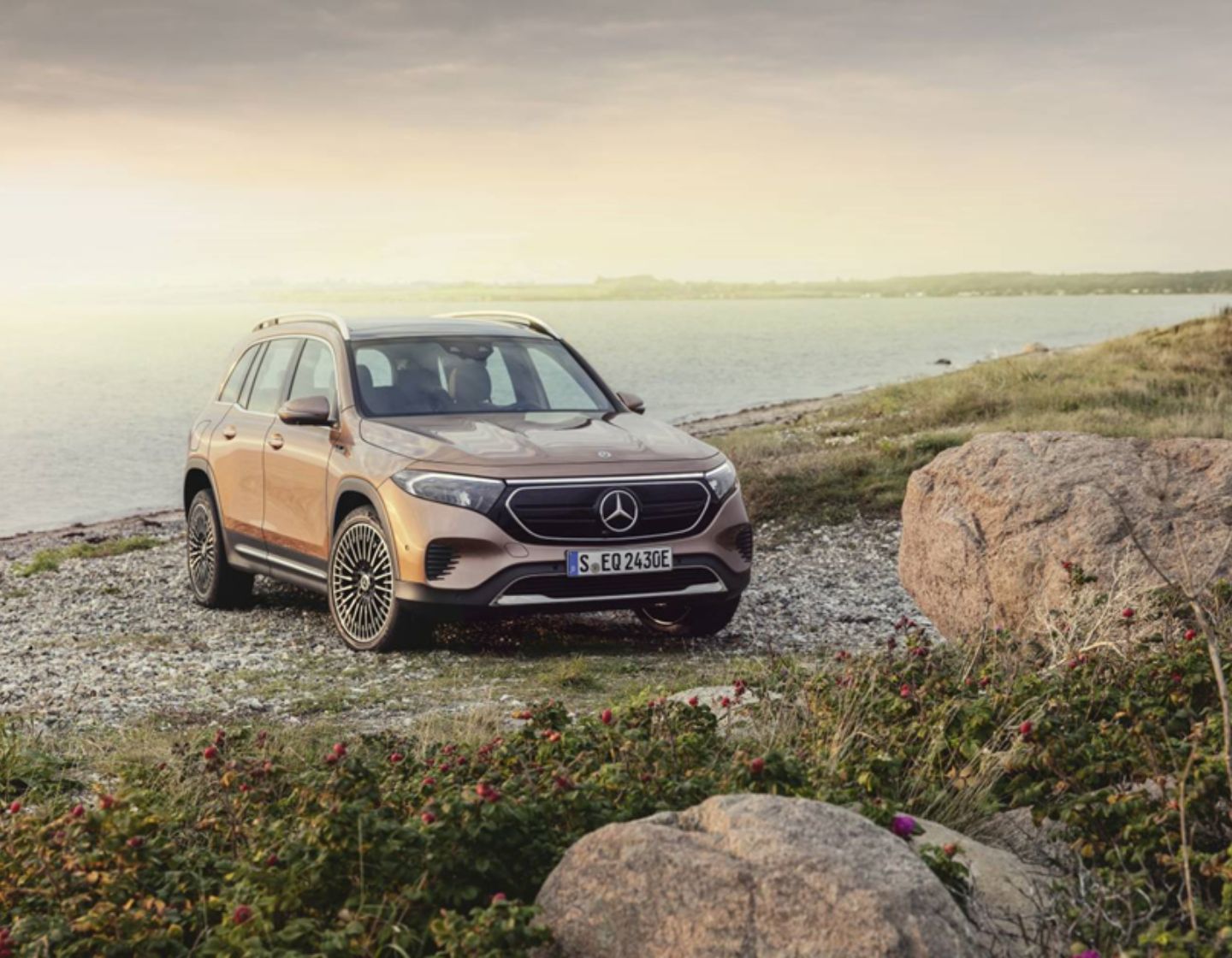 Skoda’s first fully electric SUV boasts a range of up to 332 miles and is available with 2 battery sizes (58kWh or 78kWh) and 2 body styles (a full SUV or SUV Coupe). The Enyaq offers an entry-level version aimed at families, alongside a 78-kWh battery variant offering longer distances. A four-wheel drive VRS version has also been launched to cater for those looking for a bit more performance. The Enyaq has taken the market by storm with its more conventional, some may say traditional, looks. It’s proving to be a hit with company car drivers and families alike. 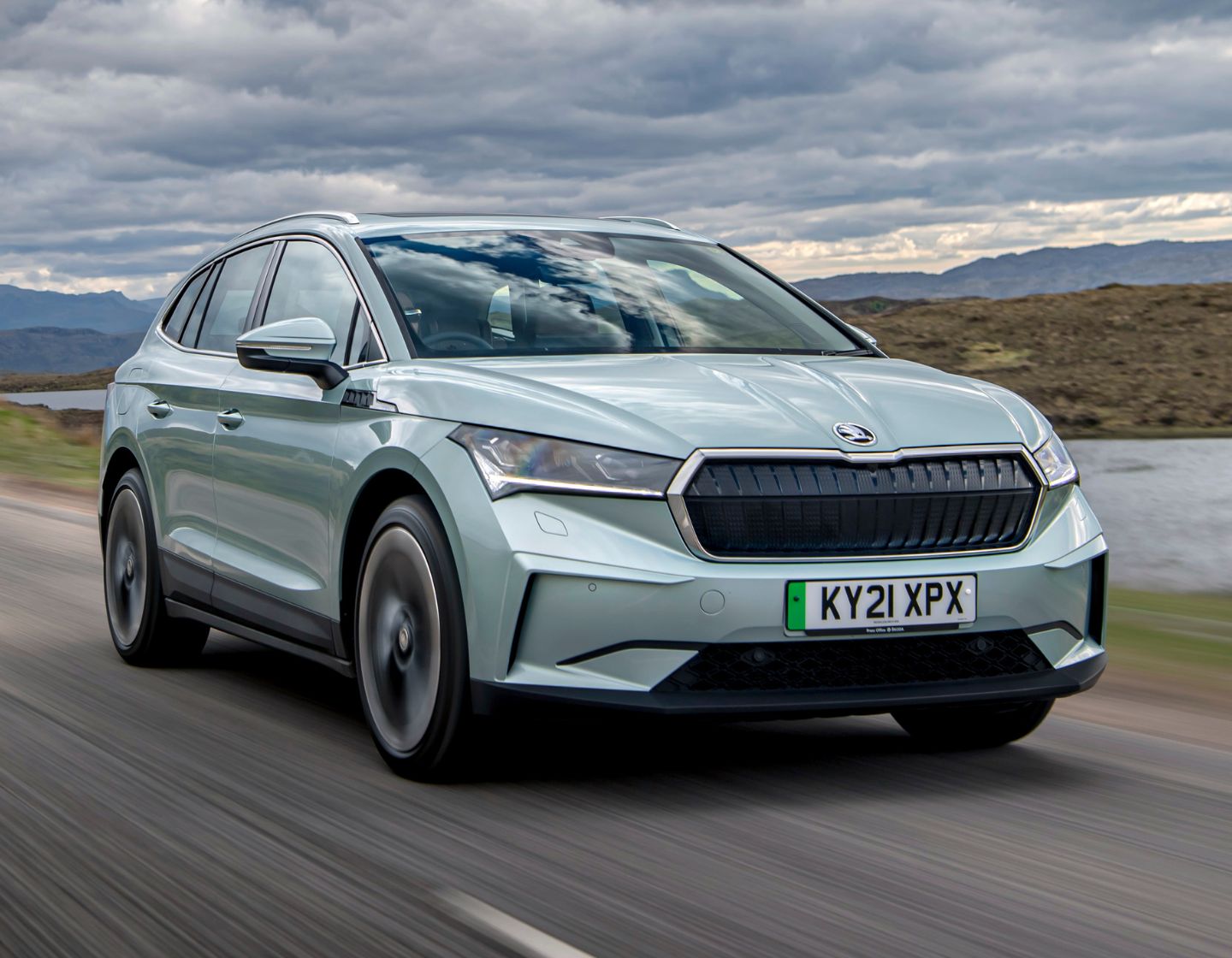 The ID.4 is VW’s second mass-market purpose-built EV using Volkswagen’s modular MEB platform. The MEB platform will be the base for over 70 electric models in the coming years (The Skoda Enyaq, VW ID.3 and VW ID.Buzz also use the MEB platform). The ID.4 has a 52 and 77 kWh battery variants, boasting up to 334 miles of range, it offers 135kW DC charging capability, meaning you can charge from 20% to 80% in around 33 minutes. The ID.4 is good practical family car that will suit both family drivers and company car drivers alike. The ID.4 also boasts a 5 star Euro NCAP safety rating and 3 Isofix ready seats available. 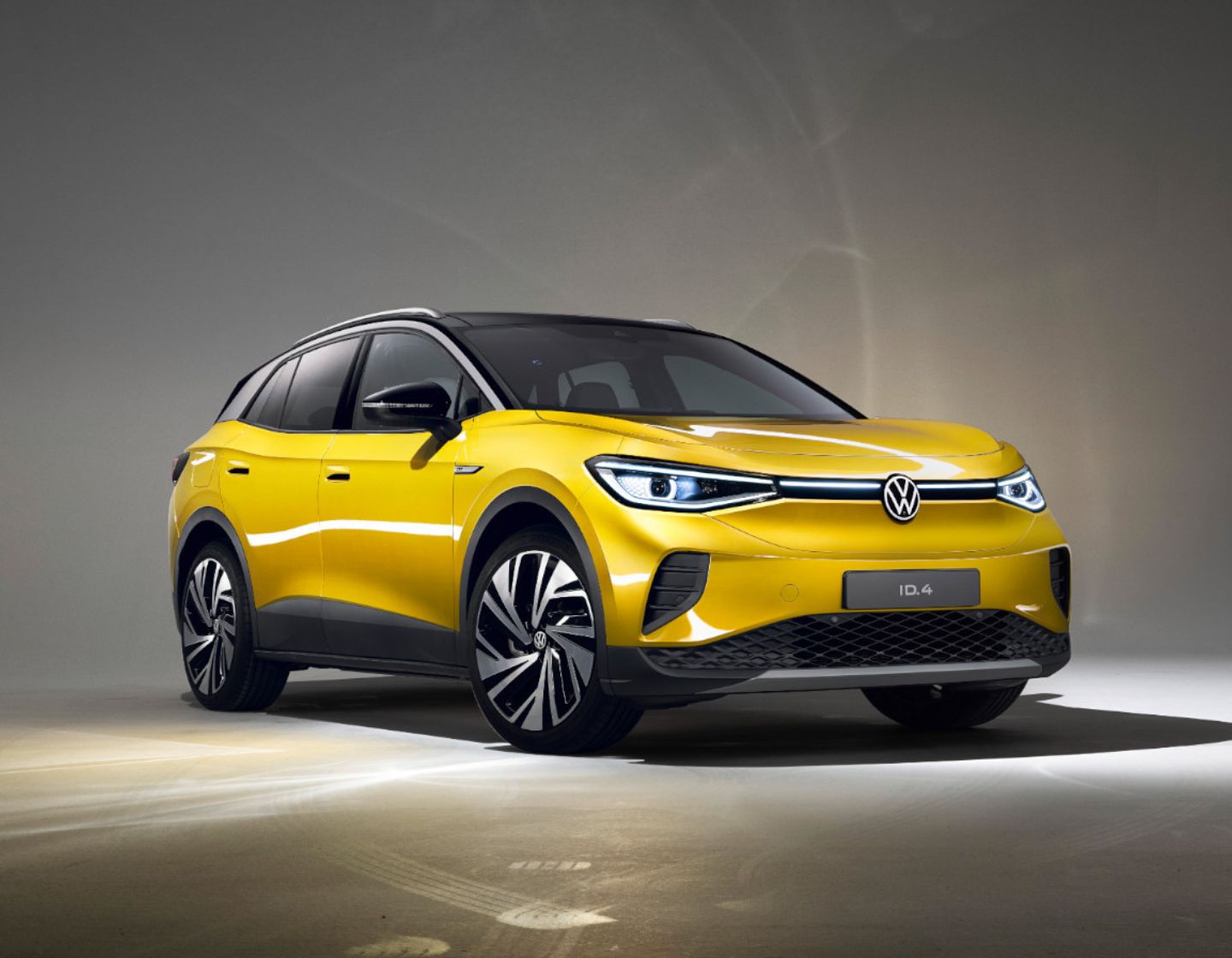 Tesla’s Model Y is Elon’s second electric SUV, the Model Y is based on the highly successful Model 3. You get more leg room and head room in the Model Y but the 7 seats that featured in the concept didn’t make it to the production model. When quizzed, Tesla said they still plan to have a 7-seat version but have yet to announce when it will be available. Like all Tesla’s, the real selling point is the range and efficiency, combined with the giant infotainment screen and great tech. A key selling point is also access to Tesla’s ultra-reliable Supercharger network. The Model Y also has the capability to rapid charge at 250kW, meaning it can charge from 20% to 80% in just 27 minutes. Those wanting a bit more punch, can opt for the performance version which will offer a 0-62mph time of 3.5 seconds and 150mph top speed, as well as 21” wheels as standard. 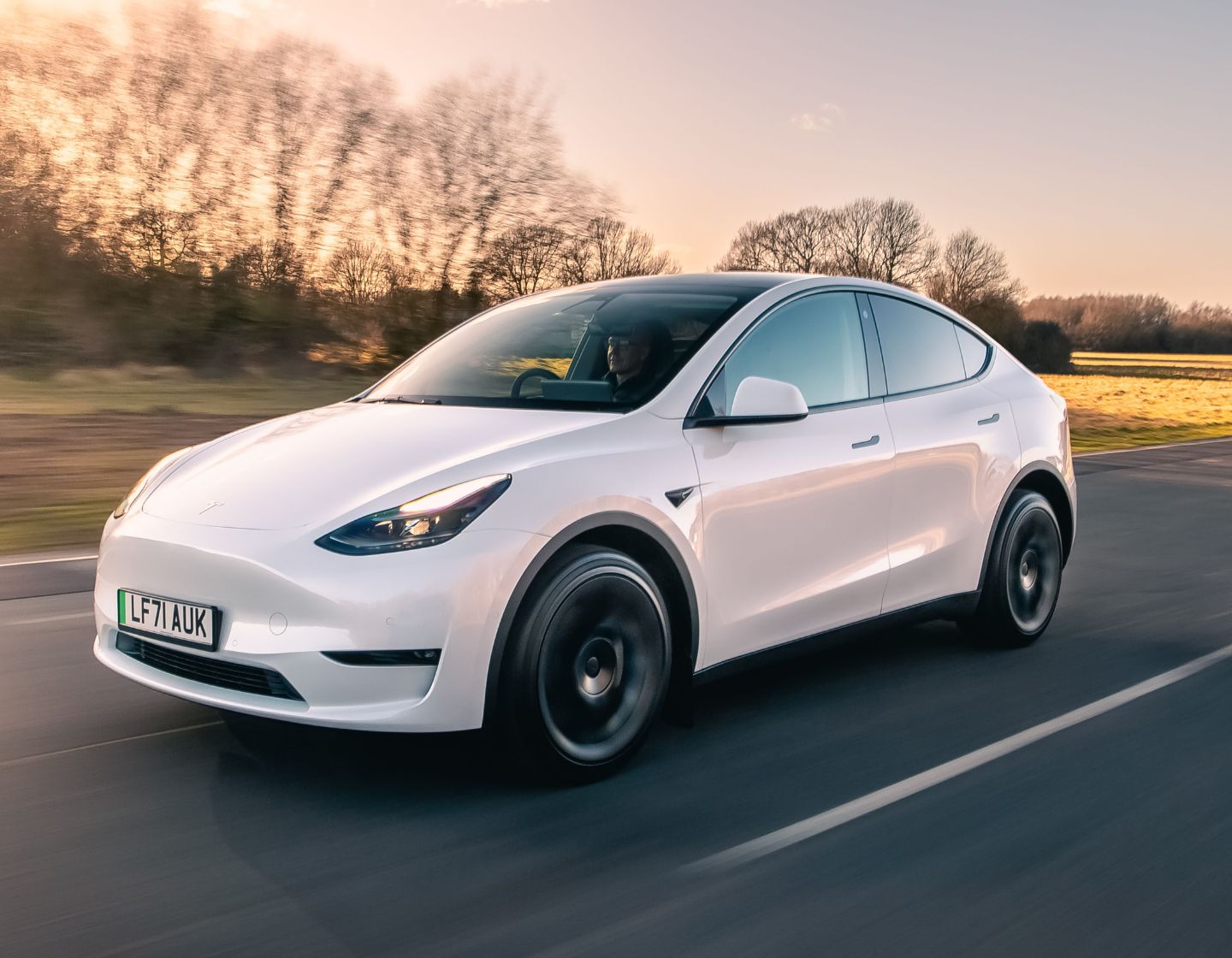 The Nissan Ariya is the brand’s first all-electric coupe crossover, built on an all-new platform, with 5 versions to be available in Europe, a 2WD version with either a 63kWh or 87kWh battery, and an AWD version with the same battery sizes. There will also be a performance model which will also have AWD and feature the 87kWh battery. No strangers to the EV sector, Nissan were the first to launch a commercially viable EV with the Nissan Leaf in 2010. That expertise and experience in the sector is apparent in the new Ariya. The e-Pedal, which offers one pedal driving has made its way across from the second-generation Nissan Leaf into the Ariya. The e-4ORCE AWD system is the spiritual offspring of Nissan’s intelligent 4×4 system, normally found in the Nissan GT-R and Patrol. Available to order from July 2022, expect the Nissan Ariya to be popular with both family and company car drivers. 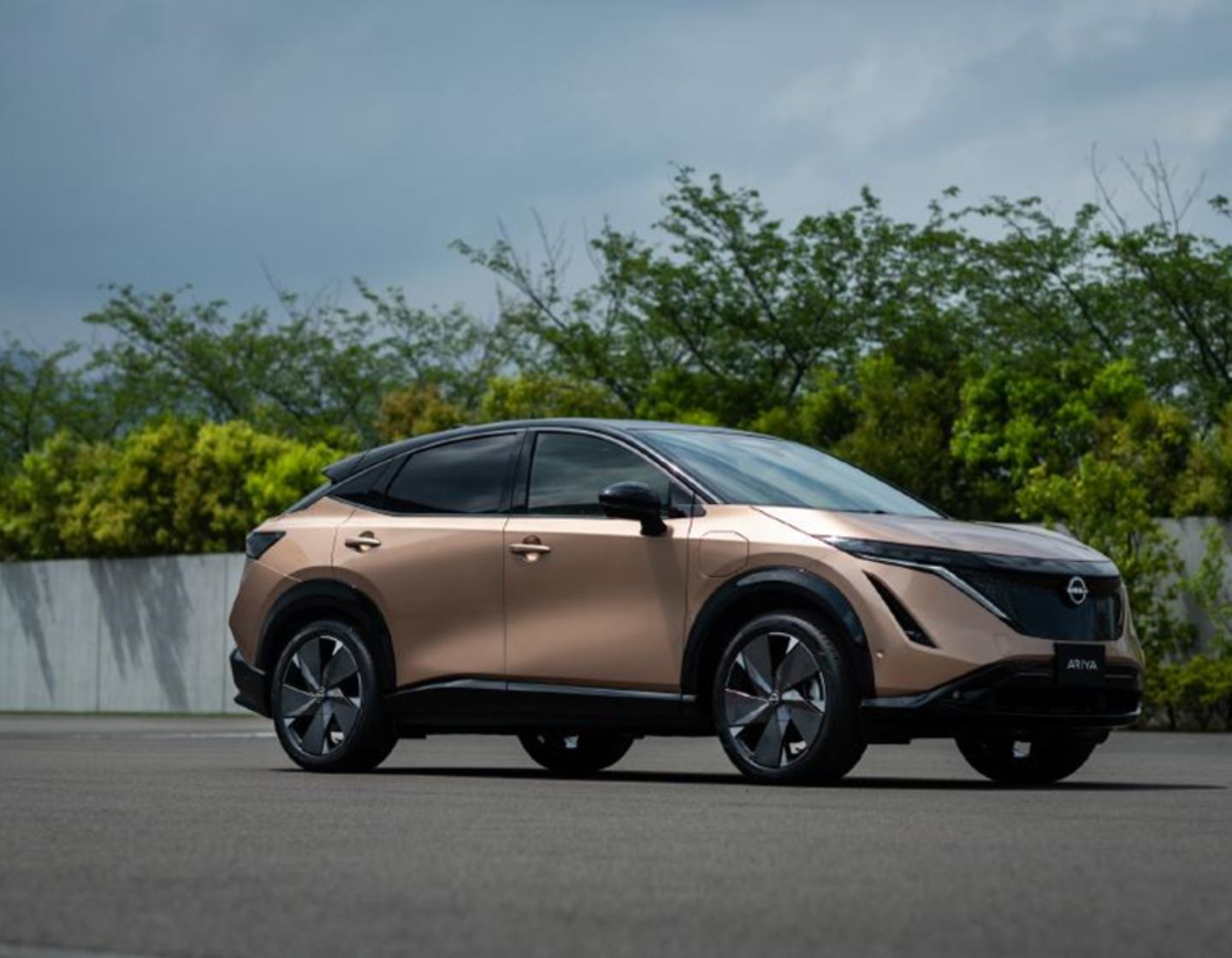 Volkswagen’s ID. Buzz is the spiritual successor to the original split-screen VW Type 1 Samba Bus, affectionately known as the Hippy Van. The ID.Buzz is being built on the VW MEB platform and will be available in both a passenger van as well as a full commercial vehicle version called the ID. Buzz Cargo. The passenger version comfortably sits 5 people and the 77kWh battery is good for 263 miles (WLTP), the ID. Buzz also has 175kW DC charging, meaning it can charge 20-80% in around 30 minutes. The ID. Buzz is also built with sustainability in mind, rather than using traditional leather, the seat coverings and headlining are all made from recycled materials. The large 10” infotainment screen is also Apple CarPlay ready and operable with gesture control, and wireless charging for your smartphone. 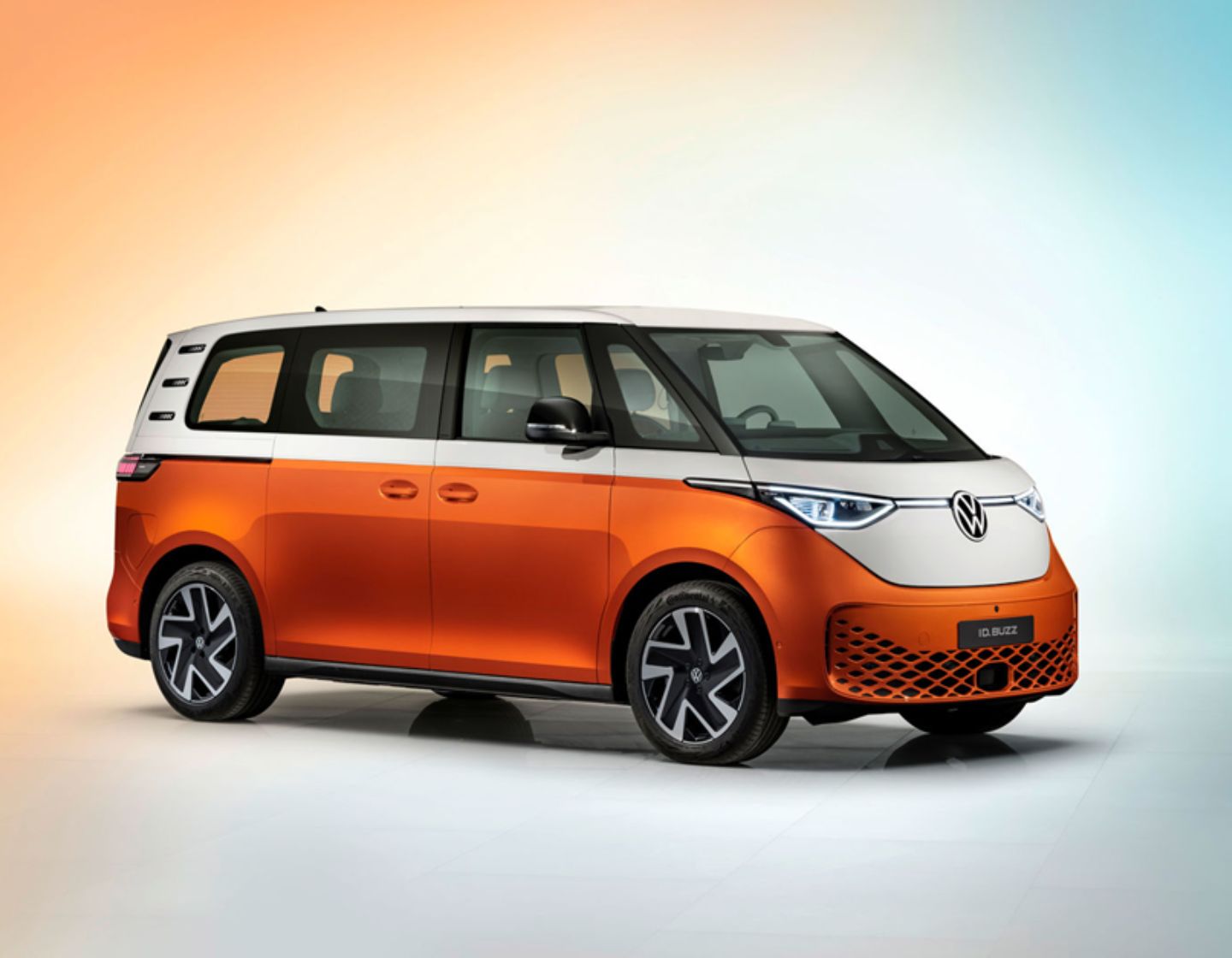 The Mach-E is Ford’s first purpose-built fully electric vehicle, with a range of up to 379 miles and AWD. The performance will match its Mustang moniker with a 0-60 mph time of 4.4 secs. The Mach-E is available with two battery options (76kWh or 99kWh), it also boasts up to 109kW rapid charging capability to ensure your charging time while on the road is minimised, allowing you to charge from 20-80% in around 50 minutes. Inside the Mach-E it will comfortably seat 5, with its hatchback boot and 100-litre “Frunk” (Frunk = front boot to us Brits – it’s basically extra storage space where the internal combustion engine used to be). 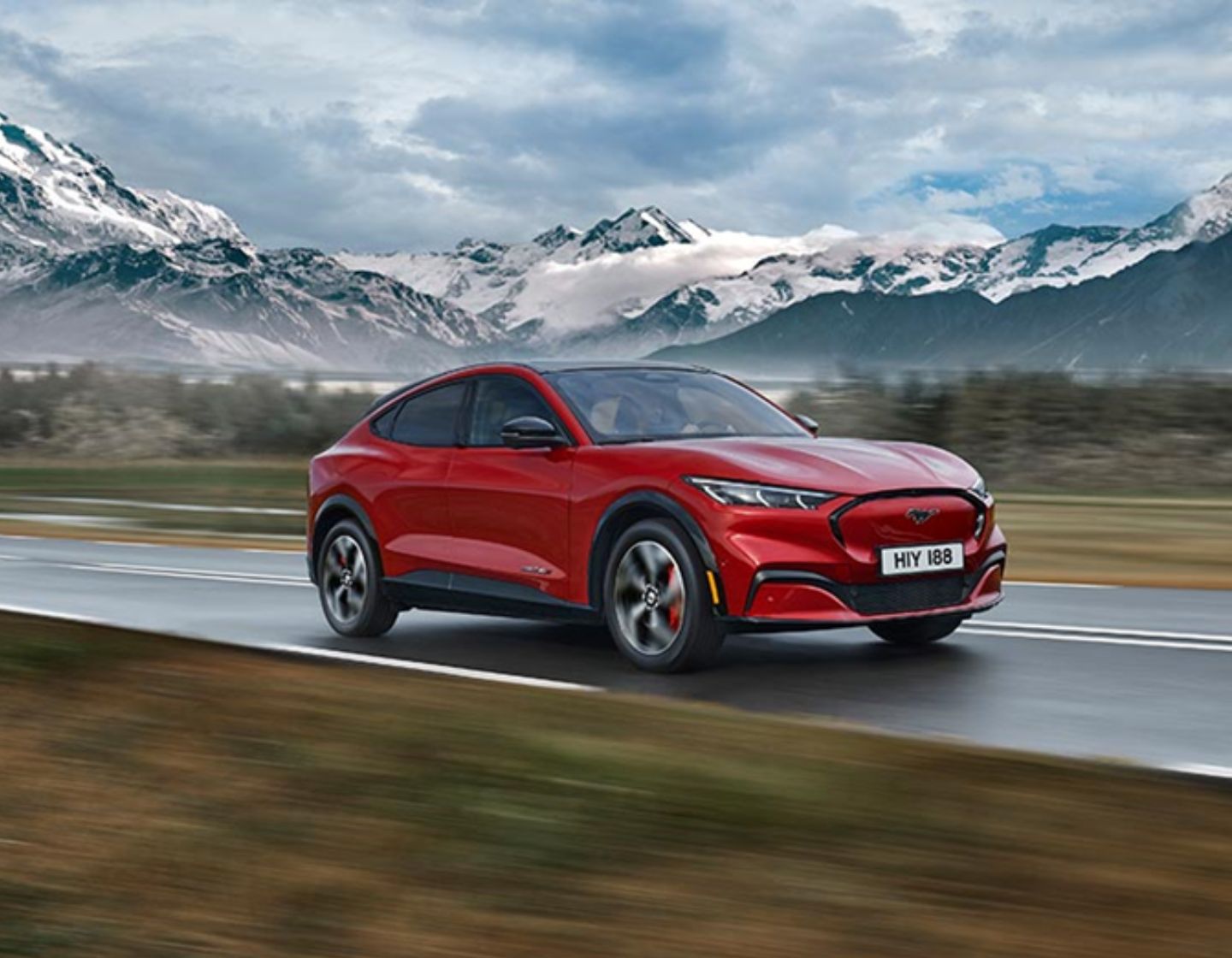 The Vauxhall Mokka-e is a crossover small SUV, that was a big hit with families in its previous guise, the second generation doesn’t disappoint, with much improved styling and now available in petrol and electric variants. The electric version uses a 50kWh battery and has a WLTP range on 210 miles. This Mokka-e is the perfect city crossover for a young family, with ample space for pushchairs and all the necessary supplies for a day out. 100kW on board charging means you can go from 20-80% battery in around 30 minutes, the electric variant also comes with Apple CarPlay and Android Auto smartphone connectivity, allowing you access to music apps such as Spotify and navigation apps such as Waze and Google maps. It’s the perfect electric family car for zipping around town, offering space and electric motoring at a more affordable price than some of its competitors. 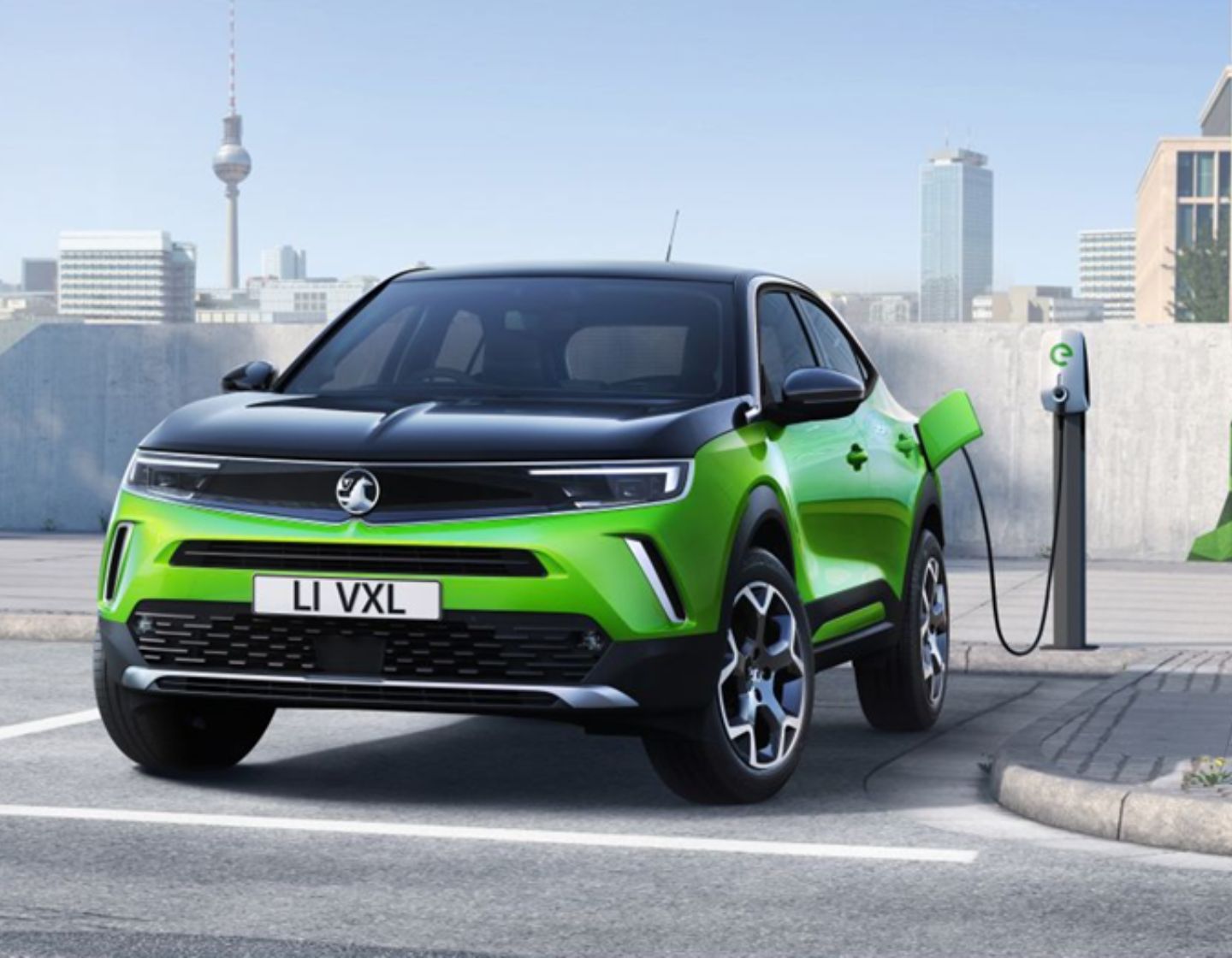 The Hyundai Kona Electric is already in its second guise, and it feels the new model has been designed with the electric platform in mind rather than the ICE (Internal Combustion Engine) platform. This is clear with the sleeker, more aerodynamic design and, like many of its competitors, it comes with two battery options, a 39kWh and 64kWh. The latter is the one which will appeal more to the long-distance driver, as it will offer up to 300 miles in range. It will also feature 150kW charging capability, meaning it can go from 10% battery to 80% in around 44 minutes. Hyundai have their eyes firmly set on mass adoption rather than outright performance, and with the Kona that’s clear. Don’t be mistaken though, it’s no tortoise. It still offers 201 bhp and a 0-60 of 7.6 seconds, but when compared with its counterparts it’s distinctively slower. It is, however, a lot cheaper, with the entry level 39kWh battery version coming in just over £30k. 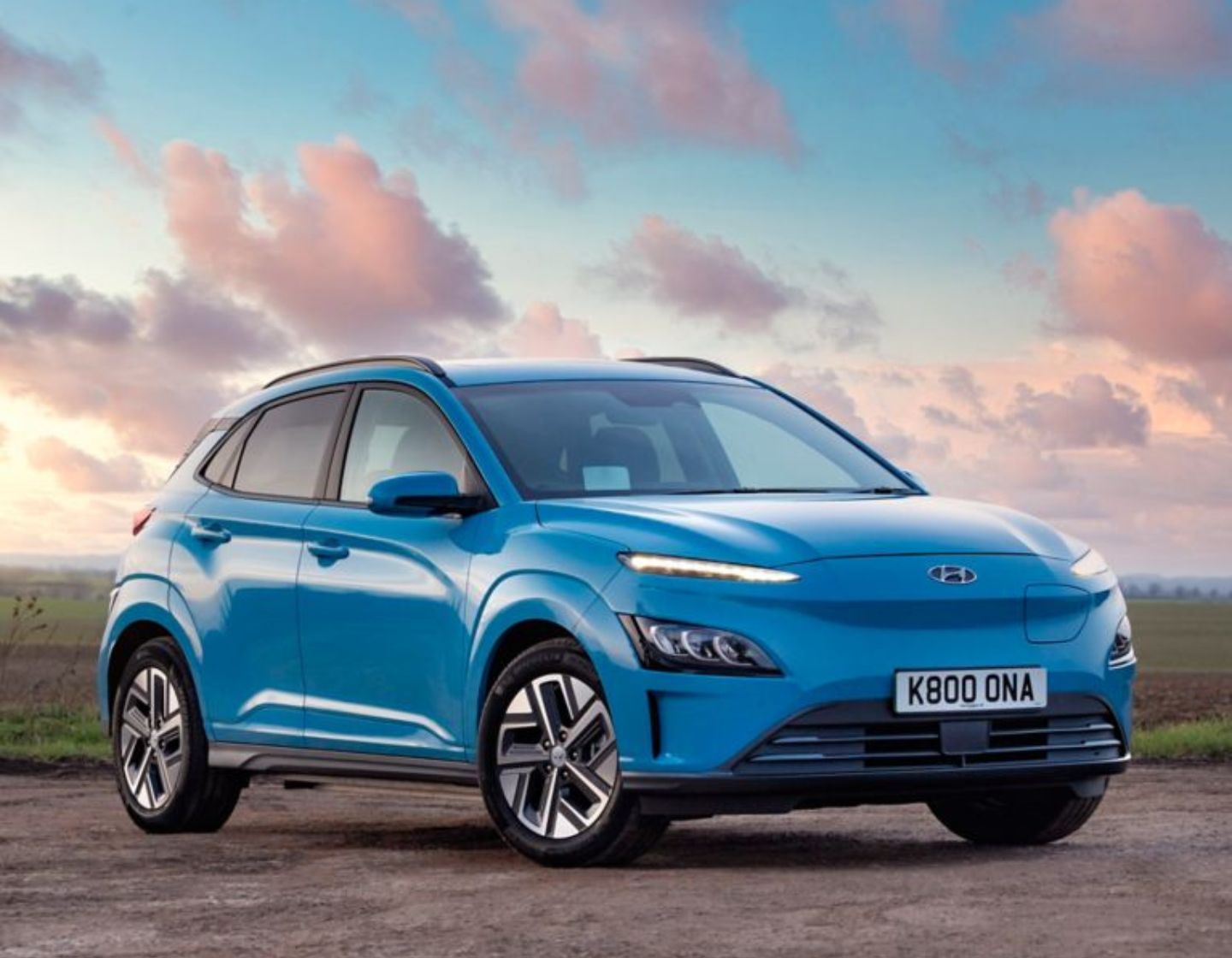 Once you have found your perfect family electric vehicle, you’ll need to charge it, we recommend our top-selling electric vehicle home charger, the Easee One EV Home Charger. It’s small, smart, full of power, easy to install, easy to use, and at a competitive price. Easee has done everything to make it as easy as possible to choose a home EV charger.

With UK stock ready for next-day delivery across Easee’s latest range of EV chargers, ready-to-go installation kits, and accessories, all combined with the best prices and advice – we are here to help.