You are here: SaveMoneyCutCarbonLearn&Save – OverviewThe environmental impacts of the COVID-19 pandemic
Compare Products

As COVID-19 has demonstrated, viral pandemics have huge impacts on all parts of society – economies, health services, supply chains, aviation and travel and leisure facilities just to name a few. Businesses and organisations large or small feel the effects of uncertainty, and no one is immune, including earth’s climate.

With many countries on nation-wide lockdowns, schools closing, travel halted and businesses encouraging staff who are able to work from home to do so, the lack of movement in affected countries has already had remarkable effects on the reduction of greenhouse gas emissions.

According to a study completed by Carbon Brief, China’s “electrical demand and industrial output remain far below their usual levels”, with a four-year low in average coal consumption at power plants. The country’s carbon dioxide emissions are 25% lower than average, with nitrogen dioxide (NO2) levels at 36% lower when compared to the same post-holiday period in 2019.

Satellite imagery published by Nasa confirms this, showing a dramatic drop-off of NO2 density sustained well after the Chinese Lunar New Year period had ended. Experts believe that an overall fall of about 1% in China’s carbon emissions this year is likely. TIME has reported that China’s emissions this year are 300 million tonnes of carbon dioxide, demonstrating a drop of 100 million tonnes from last year – roughly the same as Chile’s annual emissions. 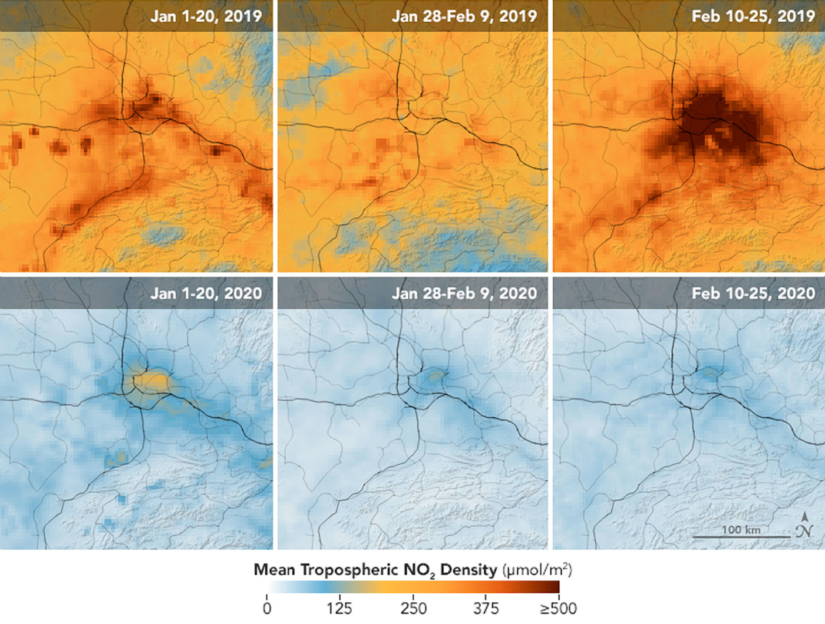 Similarly, though with some caveats, traffic levels in New York have reduced by an estimated 35%, and researchers have reported that their early findings have shown carbon monoxide levels (mainly from cars) have been reduced by nearly 50% compared to the same period in 2019. This is expected to continue through to May of this year, where levels may be the lowest recorded since the financial crisis of 2008-09.

There have also been impacts in Venice, where drastic measures have cleared the canals of tourists and residents alike. The lack of water traffic has allowed the sediment in the canals to clear, making way for fish, swans and even dolphins to frolic around.

Will there be a long lasting effect of this fall in emissions?

Experts widely believe that the shutdown of many countries will have an impact on global CO2 levels for the whole of this year. Climate change science professor Corinne Le Quéré from the University of East Anglia says:

“It will depend on how long the pandemic lasts, and how widespread the slowdown is in the economy particularly in the US. But most likely I think we will see something in the global emissions this year,”

“Over the past 10 years, emissions have grown at an annual rate of 1%, or about 317 megatonnes, so you would need a really big reduction to see a fall this year. It’s plausible but I don’t think we can say at this stage.”

Rob Jackson, chair of Global Carbon Project, says that this temporary lull in emissions will only persist if governments start to change their behaviour.

“I see no silver lining to the coronavirus. If gas emissions drop temporarily then great, but it won’t be a meaningful change in the long term unless it shocks us in a global recession. Nobody wanted that in 2008 and nobody wants it now.”

“If this could change the way we travel, it could lead to more virtual meetings,”

This could be the case – events, gatherings, conferences and sports have been cancelled or postponed worldwide. The Guardian reported that instead of meeting for their annual spring gathering in Washington, the IMF and World Bank will instead hold a virtual teleconference. Could the economic and carbon savings of these activities not going ahead this year prompt more of these virtual substitutions being utilised?

Behavioural change is needed to maintain this drop in emissions

Nonetheless, this all depends on how governments decide to re-stimulate their economies once this pandemic has eased, as it could see carbon emissions rise, as they did by 5% after the 2008-09 global financial crash. Professor Le Quéré explains:

“Governments now have to be really cautious on how they re-stimulate their economies, mindful of not locking in fossil fuels again,”

“They should focus on those things that are ready to go that would lower emissions, like renovating buildings, putting in heat pumps and electric chargers. These are not complicated and can be done straight away, they are just waiting for financial incentives.”

If the pandemic is to last many more months, many argue that any stimulus would be focusing on economic growth at the expense of the climate, as it is very different to the financial crash. If anything, the way that governments around the world have handled this emergency demonstrates that quick, radical steps can work. We can only imagine what might be if the climate crisis had had the same levels of radical actions as COVID-19.

Saved a significant amount on these high quality fixings compared to other online retailers. There was… Read more