The recently released Quarterly Statistical Release is a strong snapshot of the green potential in Britain.

Figures published in the QSR by the Department of Environment and Climate Change show the continued emphasis on insulation as a decisive intervention, with energy consultants promoting loft lagging strongly. In the sphere of the Green Deal, this accounted for 14 per cent of all recorded measures and was recommended in over a third of all assessments.

Interestingly, the data does not explicitly advise on payback periods, which are very long-term. This is not to argue that insulation and other measures such as double glazing are pointless, far from it. But we’ve consistently argued that simple, effective and rapid payback measures like LED lighting and water-saving solutions – eco showers, eco taps and tap aerators – would be a brilliant, engaging way to reduce energy consumption.

A version of the Green Deal Cashback voucher would work well in this case. Arguments around the issues of these solutions being potentially removable are weak. Our experience is that few people remove lighting if they move property and even fewer take showers and taps with them!

The DECC figures also show that while owner occupiers are moving to deploy sustainable energy-saving solutions, the social housing and private rented sector understandably are lagging behind.

In March 2014, there were 27.3 million homes in Great Britain. Of these, 19.3 million had cavity walls with the remaining 8.0 million having solid walls and 23.8 million properties had a loft.

Between January 2013 and March 2014, measures were installed through ECO (the Energy Companies Obligation) in 648,000 properties, following the redemption of Cashback vouchers in 11,000 properties and through Green Deal finance in 1,000 properties. 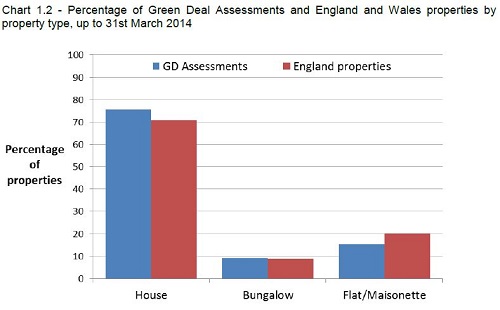 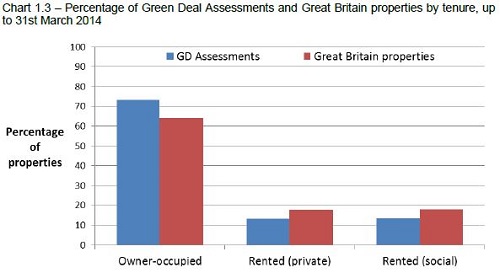 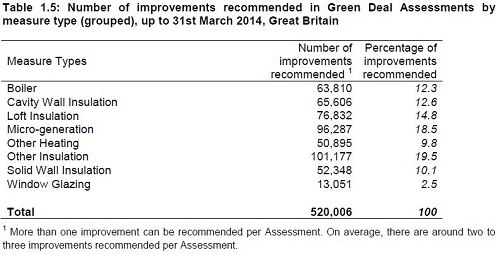 The recently re-launched and boosted Green Deal paid out £8.5 million in the scheme’s first two weeks. But the new Green Deal Home Improvement Fund and the Coalition continue to miss the main point, which is that two key areas – lighting and water are sadly neglected in all of the national energy efficiency programmes – as the table above shows.

A total 2,821 applications were been made in the opening fortnight of the home improvement fund which offers households money back for making energy efficient home improvements from an approved list.

Under the new incentive scheme domestic energy customers can get:

The scheme also entitles those who have bought a property in the 12 months prior to application to qualify for up to an additional £500 if they carry out energy efficiency improvements.

The figures reflect the slow pace of green development currently but also give some hope that there is greater potential locked up in all types of property and tenure. The impetus for much more effective, rapid return, engaging and vibrant national energy efficiency programmes is strengthening.

As the political focus begins to turn towards the next General Election, the Coalition could do worse than stamp its imprimatur on the green housing sector by a comprehensive programme helping individuals, aggregated groups and businesses to see swift, sustainable, subsidised return on energy efficiency investment.