The smart future for LED lighting with a brilliant potential for the next generation was graphically illustrated by Professor Danielle George in her BBC lectures over the holiday. 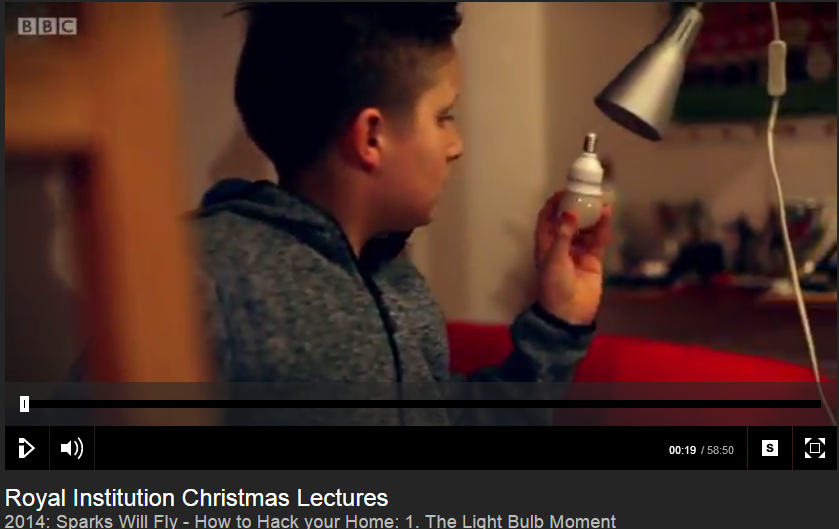 Professor George used her first Royal Institution Christmas lecture to focus on the light bulb as part of her trio of themed talks on “Sparks Will Fly – How to Hack your Home” – and her young audience was spellbound, as were the millions watching.

Professor George, who works at the University of Manchester, showed how far the technology of lighting has come since the first working light bulb was invented in Newcastle by Joseph Swan in 1878.

Centrepiece of the lecture was a live demonstration of a computer game played on the windows of a London skyscraper using hundreds of LED light bulbs, using wireless and a simple controller. LED bulbs were chosen because of their brightness and unique controllability.

We learned or were reminded that the LED technology now available has an infinite number of potential innovative uses because there is intelligence built into the construction through the chips used.

The computer game demonstrated how effectively we can now adapt and control our lighting environments, using wireless and mobile devices. Professor George showed the young people in the audience how relatively easy it is to set up and manage a wireless lighting control system – even demonstrating how a circuit could be made using linked hands!

Behind the enormous fun and enjoyable learning was some very impressive technology that enables light bulbs to become smart, easily controllable and even more efficient in terms of energy use. Professor George emphasised how effective the LED bulbs are in the way they use energy – and we know that they consume up to 85% less electricity than the traditional tungsten bulb. Learn more here.

The chips in the LED light bulbs also make the task of controlling lighting wireless much more functional and less complex. Harnessing the potential “smart” qualities of the chip gives manufacturers and users a wealth of opportunity.

A new world of rich lighting colour is also possible through the unique qualities of the LED, with millions of controllable colours available through RGB LED technology.

Even more impressive is the potential for LED light to be the conduit for information – LiFi. Innovative UK companies like pureLiFi provide high-speed wireless using LED that gives greater security, safety and data densities than Wi-Fi.

This is possible only because of the inherent facility of LEDs to be controlled to the nth degree – being turned on and off rapidly. This high-speed modulation is detected by a photo-detector device and converted back to electrical current. The combination of illumination and data services also reduces infrastructure complexity and energy consumption.

LED lighting technology is the new de facto standard for illumination and offers the promise of a solution to our increasingly pressured data network services. The range of lighting solutions and the ability to control light intensity and colour variation is peerless while the energy saving properties of this technology are unmatched.

It’s why we favour LED lighting solutions above all others for every home, business and organisation.

After the lighting spectacular, Professor George also had fun with two other great British inventions – the telephone and the motor in her remaining lectures. The lectures are on iPlayer until last week of the month. See them here: http://www.bbc.co.uk/iplayer/episode/b04w84yp/royal-institution-christmas-lectures-2014-sparks-will-fly-how-to-hack-your-home-1-the-light-bulb-moment