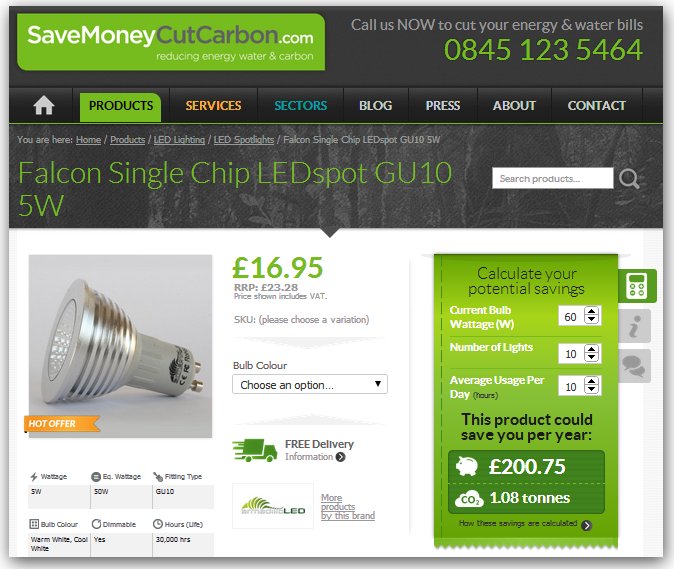 A survey of 700 companies by 2degrees, the leading community for sustainable business, reveals that low energy lighting is the measure that businesses are most satisfied with in improving their energy performance.

The findings confirm again for us that the low energy benefits of LED lighting are the sustainable solution for companies, organisations and consumers who want to cut energy bills, cut energy consumption and cut carbon footprint.
2degrees reports that 55% of businesses say they have implemented such an initiative while nearly two thirds of those yet to do so said they planned to this year.

But more than a third have no plans to invest in building controls, despite the proven effectiveness of smart controls. In our experience, smart lighting controls and smart heating controls have a rapid return on investment and then go on saving companies money year after year.

Tellingly, the 2degees survey indicates that embedding sustainability within businesses is a tough nut to crack, despite its importance. Half the businesses who invested in staff engagement in the past year found it unsuccessful.

From our work here, we know how crucial the buy-in from staff is for any sustainability initiative and moving beyond the minority of employees who are natural activists involves a range of tactics that appeal to the broadest base.

We believe that clear advice and proof work effectively – telling the sustainability story with case studies and data, sharing knowledge and guides. While we focus on the proven benefits of LED lighting, water efficiencies and smart controls, colleagues in the sustainability sector like Global Energy Systems, also spread the sustainability message around air-source heat pumps (http://www.globalenergysystems.co.uk/)

Also reported this week, campaigner Chris Goodall, who stood as a Green candidate at the last General Election, is promoting the idea of giving vouchers across the UK for people to buy LED lighting.

Lux magazine reports in its February edition that Chris suggests that the Government gives every householder a voucher for 10 high efficiency LED lightbulbs.

At the very least, Chris’s proposal raises awareness of the benefits of LED lighting for consumers (and businesses), which is must needed given the total lack of support at the government level.

We’d add that there is a world of difference between cheap-as-chips LEDs and quality products. Any LED voucher scheme should ensure that people buy proven, tested and trusted LEDs that are built to deliver best quality light and will go on saving consumers money for many, many years.

It’s really important to recognise that LED lights are very different from the old incandescent bulbs, the neon tubes, halogen bulbs and even the cold, cold CFLs. The LED lamp is an electronics device, with components that need to be of the highest quality to ensure longest lifespan and light quality.

That’s why we’re working to share the best information about LED lighting with households, businesses and organisations. As a start, we’ve published a Hassle-free Guide to LED Lighting.

We think people need to have this knowledge, to understand the differences and benefits of LED lighting, right down to the types of fittings (GU10, M16, Edison screw, bayonet etc.) and what the packaging details mean (lumens, energy charts etc.).

We’re working on additional energy-saving Guides to cover every element around buying LED lights and every LED product we offer has an online calculator to show how much people will save, as well as the annual carbon emission reductions (follow example link in image at top of this post).

We want people to feel confident about choosing LED lights and give them the right guides so they can spend their money wisely – and the range is broad, from LED bulbs to LED spotlights, LED tubes, LED downlights, LED capsules, LED panels and LED floodlights, through to LED car park lighting, LED street lighting, LED emergency lights, LED high bay and low bay, and LED high-performance RGB.

Chris believes that the scheme would cost £1.6bn, or slightly more than the failing ECO scheme.

Chris says: “In the last year, LEDs have come of age. The newest lamps now give the same quality of light as halogens and the old incandescent bulbs. They fire up immediately, unlike many compact fluorescents (CFLs). They last many tens of thousands of hours, or several years in continuous operation. They can be retrofitted in existing 12v and mains lamp fittings.

“A 7w LED can provide approximately as much light as a 35w halogen, a five to one improvement. All our lights will be LED at some point in the future. We need to accelerate the transition.”

Chris’s idea fits with our continued appeal for the Government to really step up now and promote properly a national programme that helps businesses, organisations and consumers cut consumption, cut bills and cut carbon.