The global pandemic has made all of us so much more aware of the potential dangers lurking on every surface and in every environment.

While the COVID-19 virus continues to spread in many countries, we also know more about the persistent passive transmission of all types of germs: viruses, bacteria, spores and other pathogens.

At work, in healthcare, transportation, hospitality, sports and in the home, we all recognise the need to contain, control and if possible destroy the micro-organisms that threaten the health and wellbeing of us all.

One proven way to make a huge impact on the spread of pathogens is through the use of specially tuned light and SaveMoneyCutCarbon is partnering with a recognised market leader in the field, Vyv.

The company has developed pioneering antimicrobial LED technology to create cleaner spaces for us all. Vyv was co-founded eight years ago by Colleen Costello, who has a background in clinical device research, biomedical engineering and product development.

She was prompted to look at better antimicrobial solutions after her grandmother contracted the “superbug” MRSA bacterial infection while in hospital in 2012. That life-threatening episode convinced Colleen Costello to focus on ways to provide effective, efficient, and continuous solutions to control and eliminate micro-organisms in healthcare and a whole range of other environments.

It is estimated that 300,000 patients a year in England acquire a healthcare‑associated infection as a result of care within the NHS. There are many reasons for antibiotic resistance becoming rife within the hospital environment. Up to 50% of resistant infections are acquired by hospital patients. These infections are known as hospital-acquired infections (HAIs).

The Vyv solution is an innovative light-based antimicrobial technology, one that has become more important than ever. It manufactures LEDs that harness a precise spectrum of visible light to destroy microbes, preventing the growth of bacteria, mould/mildew, fungi and yeast.

Studies have shown that the wavelengths of light that Vyv’s LED technology emit, do not create “superbugs” – identified by the World Health Organisation as “one of the biggest threats to global health, food security, and development today.”

That is because the particular spectrum of light being used activates porphyrins in the microbial cells, producing excessive Reactive Oxygen Species (ROS), such as singlet oxygen, hydrogen peroxide, and hydroxyl groups. As these ROS accumulate, they become toxic, destroying multiple structures within the cell that leads to cell death.  It is difficult for the microbes to produce enough mutations that do not kill the cell to generate viable resistance.

The studies tested different bacterial strains, including MRSA and E. coli. The bacteria cells were exposed to the 405nm wavelengths and the surviving cells were collected, re-grown to higher amounts, and re-exposed to the lights. This was repeated for as many as 20 cycles, and none of the species tested showed any development of resistance by the end of the longer-term exposures. This lack of resistance after repeated exposure shows that the development of resistance to the antibacterial light is not likely to occur, especially on surface environments.

Vyv’s technology uses a selected light wave that meets the international standard for continuous and unrestricted use around humans. The LED products can be used continuously, even while the space is being used. What’s more they can replace standard lighting fixtures, providing both high-quality, energy efficient light along with the antimicrobial effect.

The technology derives its microbial killing power from within the visible light spectrum (380-750nm), specifically the 400-420nm range, which is known to destroy bacteria, fungi, yeast and mould/mildew.

Vyv’s killing action is completely different to that of UV. It works by activating particular types of porphyrin molecules that are present specifically in microbial cells, but not in humans, plants or animals. 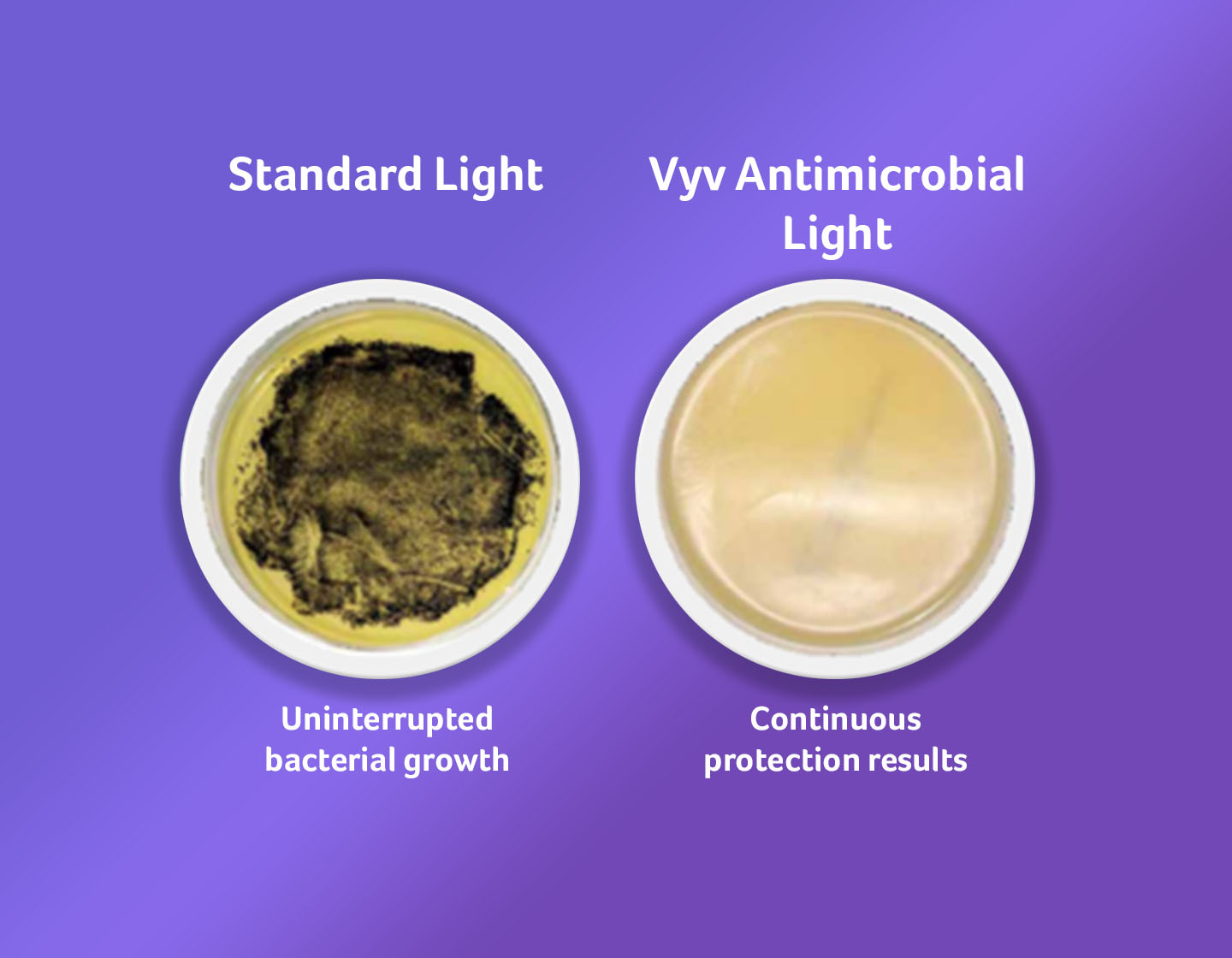 When activated, the porphyrins produce excessive Reactive Oxygen Species (ROS), such as singlet oxygen, hydrogen peroxide, and hydroxyl groups. As these ROS accumulate, they become toxic, destroying multiple structures within the cell that leads to cell death.

But as the types of porphyrin molecules found in humans and other animals are not photoactivated by light in the 400-420nm range, Vyv light technology has no negative impact. This has been demonstrated in scientific, peer-reviewed studies that have exposed mammalian and human cells to these wavelengths.

There are so many advantages to antimicrobial light combined with traditional cleaning methods beyond healthcare into the widest range of commercial, educational and domestic environments.

Studies confirm that the antimicrobial LED light technology can be used on materials like stainless steel, glass or plastic surfaces, whereas UV is known to degrade materials because it breaks down the chemical bonds in plastics, gaskets, insulation, and similar materials.

Vyv’s LED lighting does not impact these materials, so it is designed for areas where the caustic effects of UV are undesirable or impractical.

Public opinion on hygiene has shifted significantly since the start of the pandemic, Vyv conducted research in the US in April which found that that 82% of the 1,000 respondents were more aware of cleaning tools and protocols used in public spaces – and that 76% will hold brands accountable for the way they clean their spaces.

Vyv has seen a 4,000% increase in demand month on month since March. Organisations of all sizes and homeowners are rethinking how can they live and work in cleaner, greener environments, beyond hospitals and into airports, to households and athletic facilities.

The pioneer company has a proven track record in providing effective antimicrobial LED light solutions. In 2017, for example,  it partnered with the athletic department of Duke University in North Carolina to protect athletes from infection.

Vyv has harnessed the highly efficient tuning capability of LED for use wherever bacteria are present, likely to grow or be transmitted. The key benefit of Vyv’s antimicrobial lighting solutions is that the patented single LED diode emits the specialised light, that both illuminates large places such as manufacturing environments, and can also provide continuous protection inside small and hard-to-reach spaces.

Vyv focuses on achieving maximum dosage levels of antimicrobial action by tuning the power of the LED lights to specific lux levels, angles and distances from the targets. This all-inclusive methodology has been proven in many settings, and the technology is flexible enough to light a full production line, and all the hard-to-reach spaces, where microbes can flourish.

The technology is also well suited to smaller public spaces, for example lifts, where social distancing is difficult. Vyv solutions can replace the overhead lights and put antimicrobial LEDs behind the high-touch areas like the lift buttons.

Vyv’s, unlike other cleaning techniques, is continuous and the light-based approach has sustainability and health advantages as well. LED is a highly energy-efficient technology with a long working life and the company uses no harsh chemicals.

Want to learn more about Vyv?