The plates are similar to standard white and yellow versions but feature a vertical green stripe on the left side so that a zero emission vehicle can be identified, for example by cameras at the roadside. This potentially paves the way for new incentives for electric vehicle (EV) drivers as the country accelerates the transition to EVs as part of the strategy for meeting net zero targets by 2050.

The move comes at the same time as a ground-shifting report from the Climate Change Committee advises that the UK can make big cuts in carbon emissions more cheaply than previously thought.

You can buy a green plate only if you have a fully zero emission electric and fuel cell car – hybrids and plug in hybrids are not eligible. One of the first to own a plate was Grant Shapps, the Transport Secretary. He got his on Friday – having the green plates fitted on his Tesla at a Halfords store in Welwyn Garden City. 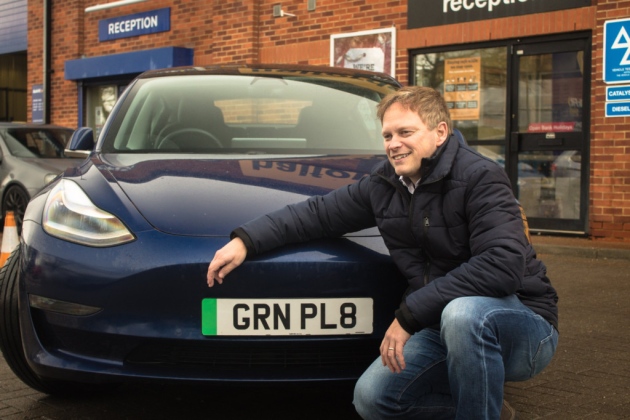 The green plates are one element of the government plans to fully develop the EV market before the ban on sales of new internal combustion engine cars and vans comes into effect in 2030, aiming to make the UK the fastest G7 country to decarbonise these vehicles.

“We are going further and faster than any other major economy to decarbonise transport, improving air quality in our towns and cities in the process and harnessing the power of clean, green technology to end the UK’s contribution to climate change by 2050.

Not only will green number plates raise awareness of the increasing number of cleaner vehicles on our roads, they could also unlock a number of incentives for drivers. It’s clear there has never been a better time to make the switch to a zero-emission vehicle.”

She added that the move underlined the government’s commitment to tackling poor air quality in the UK’s towns and cities.

The introduction of the new plates aims to raise awareness of the growing number of zero-emission vehicles, and motorists should benefit from local initiatives such as cheaper parking and cost-free entry into zero-emission zones.

They can be retro-fitted to any existing vehicles, including cars, vans, buses, HGVs, taxis and motorcycles as long as they emit no CO2 emissions at the tailpipe, and were given the go-ahead after detailed consultation with public, local authorities, and industry stakeholders.

Further boosts to the EV market have come in the past month, with the government extending the Plug-in Grant scheme through to at least 2023 and while unveiling plans to invest £950m in rolling out EV charging hubs at every service station on England’s motorways and A-roads, as well as £275m in charge point infrastructure at workplaces, homes, and on-street locations, and £90m in larger on-street charging schemes and rapid charging hubs.

This week also saw the official opening of the UK’s first Electric Forecourt from charging infrastructure provider GRIDSERVE, while auto trade body SMMT has released figures showing that sales of EVs last month were up 162 per cent compared to the 11-month period to November last year. Sales of diesel and petrol cars slumped by 55% and 39%.

The green-plate rollout comes as the widely respected Climate Change Committee made the extraordinary announcement that, for less than 1% of national wealth, the UK can reduce 78% of emissions by 2035, based on 1990 levels, compressing the UK’s clean energy timetable by an astonishing 15 years.

The committee reports that new clean technologies are proving more efficient, so reducing costs for the transformation. It estimates that costs of the low-carbon revolution will scale up to an annual £50bn by 2030 from around $10bn now, mostly funded by private investment.

Its report follow the government hosting of the first meeting of ministers from the world’s largest car markets last month to form a new Zero Emission Vehicle Transition Council. The council aims to help accelerate the pace of the global transition, with further council meetings to take place in 2021, including at the 2021 United Nations Climate Change Conference – COP26 – which the UK will host in Glasgow next November.