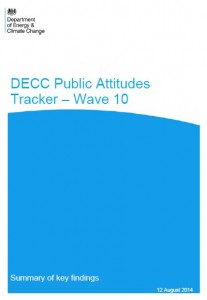 The Department of Energy and Climate Change set up a tracking survey in early 2012 to monitor public attitudes. The survey runs four times a year and consists of one longer, annual survey and three shorter, quarterly surveys which focus on a subset of questions where think attitudes might shift quickly or be affected by seasonal changes.

In contrast to the Kingfisher survey published earlier this month, the DECC survey suggests that worries about bills (35%) and concern over steep rises in energy prices in the future (32%) are at their lowest since the survey began.

The results around energy tend to be lower in the ‘summer’ wave of the survey as energy consumption is at its lowest at this point in the year but these data sets are lower than at the same point in the past two years and seem to sit in a context of a decline in concern over prices more widely – from household shopping, mortgages and transport.

Another sign that there is some degree of inertia in activity over energy issues, 27% of people say they may or may not switch energy supplier in the next 12 months, a drop since March 2014 (33%), although there was not a drop in those who planned to switch in the next 12 months. But this may be a seasonal effect as these figures are in keeping with those from June last year.

No clear trend of trust in energy suppliers has developed since the tracking survey was started and nearly half (47%) of people trusted their energy supplier to inform them of the best tariff for them an increase since March 2014 (41%). Half of people (50%) also responded that they trust their supplier to provide impartial and accurate advice on energy efficiency measures, equivalent to March 2014 (50%) and March 2012 (53%), when the question was first asked.

Tellingly, there has been a decline in support for shale gas extraction with just 24% of people saying they support this process, a decline since the previous waves (29% in March 2014 and 28% in December 2013). While around half are undecided, a quarter opposes it (24%). Three quarters of people had some awareness of shale gas (74%), which is comparable to levels of awareness reported in March 2014.

Interestingly, there has been a 6% decline over the past three months in support for nuclear energy but this is broadly the same as a year ago at 36%.

The concern and potential confusion over shale gas and nuclear also sits in contrast to the fact that concern about likelihood of power cuts has declined with 48% of people were concerned about power cuts becoming more frequent in future, down from March 2014 (61%), the lowest level since this question was first asked.

By all accounts, the next two years will be fraught with potential for power cuts and black outs as the capacity to produce energy declines. Of course, neither shale gas nor planned nuclear power plants are a short-term solution to this gap.

The team here at SaveMoneyCutCarbon.com have always argued and advocate more strongly than ever the critical need for every household, business and organisation to take urgent steps to reduce energy consumption.

DECC Public Attitudes Tracker – Wave 10 data was collected in June using face-to-face in-home interviews with a representative sample of 2,087 households in the UK.