Latest figures from the Department of Energy and Climate Change reveal a positive picture in the development of sustainable energy sources from renewables.

That’s good news for the planet, along with the indications that overall UK domestic electricity consumption is shrinking. This is a combination of more efficient household appliances and behavioural changes. 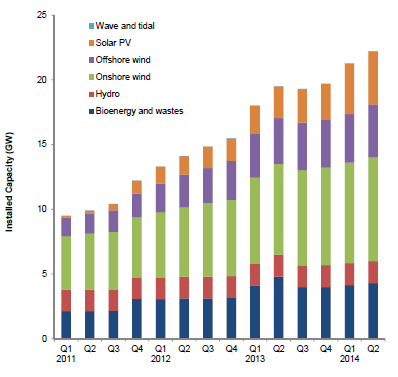 We think that the reduction curve can be accelerated simply by a national supported programme to encourage and fund the replacement of energy-guzzling traditional light bulbs with LED lighting that cuts electricity consumption by up to 85%.

The DECC data shows that the share of renewables (hydro, wind and other renewables) increased from 15.9 per cent in 2013 Q2 to 16.8 per cent in 2014 Q2. This was due to increased hydro generation as well as the conversion of the Drax power station from coal to biomass in May.

The increased share on a year earlier occurred despite a fall in generation from renewables, and reflects the fact that overall generation was at its lowest quarterly level in the last 16 years.

For the individual technology groups some of the very large percentage increases are because in 2003 there was very little use of some of the technologies in various regions.

At the same time:

The combination of a coherent national strategy for energy savings at home, in business and in all organisations with viable development of renewable energy sources is a double whammy for the UK’s sustainable development over the next few decades. The benefits are compelling enough for a visionary energy savings and generation policy to be formulated in detail.