Some easy steps to reduce water consumption have brought the metered bill under control at the family home.

The four-bedroom, two-bathroom property is a mid-terraced Victorian town house with four people.

The need to save water

The arrival of the water meter 18 months ago was a worry, having heard some horror stories about bills going up. Sure enough, the first annual bill was a shocker and the £90 monthly payment a fearsome amount to cover.

We found, however, that there was a leak, which when repaired helped to reduce the monthly cost to £60 but this was still far more than pre-meter days.

We had to find ways to reduce water usage on a limited budget and decided to try an eco shower head in the main bathroom together with tap aerators on the kitchen and second bathroom mixer taps.

Early results are really impressive, as the new shower head and tap aerators have together cut water consumption by more than 60%, compared to previous models.

We’ve estimated that the annual saving in water bills alone will be nearly £115 and we’ve noticed a reduction in gas consumption as well, which should continue to help save around £10 a month. The £200+ saving annually will be a big help in managing household running costs.

There are more savings to be made with the fitting of new basin  eco taps in the main bathroom. The current taps cannot be fitted with tap aerators so the savings made will pay for the new eco-taps and should help to cut water use there from the current 16 litres per minute (lpm) to less than 5 lpm.

In the kitchen, having looked at the tricky plumbing set-up, we decided not to install a new tap, which would have meant an expensive visit from the plumber. Instead, we chose to install a Neoperl M24 Male Eco Tap Aerator. We thought hard about this, given the need for adequate water flow in a busy kitchen but decided to try the tap aerator, which provides 5 lpm. 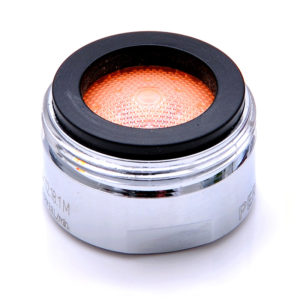 Fitting the Neoperl tap aerator was quick and very simple. It took less than five minutes to install and test. The water flow bag test confirmed the tap aerator was indeed delivering the promised 5 lpm.

Moving upstairs, installing the Hansgrohe Select E120 EcoSmart shower head was also hassle-free. We replaced the old and encrusted shower hose at the same time, with a hansgrohe Isiflex Shower Hose, which made a stylish difference to the bathroom. Again, the whole job took less than 15 minutes

The final fitting, in the top bathroom, was also very straightforward, fitting a Neoperl M24 Male Eco Tap Aerator running at 3.5 lpm in the basin mixer.

Anyone troubled by high water bills should make the move to water-saving solutions like eco showers, eco taps and eco tap aerators. The cost is not prohibitive and the products pay for themselves really quickly.

The price of tap aerators is £4.95 so that cost is covered in around a month and the shower head outlay is recouped in around 18 months. The great thing is that these products will go on giving big savings for many years.