SaveMoneyCutCarbonLearn&Save – OverviewDo I need to worry about glare from solar panels?
Compare Products

Harnessing the sun’s energy through solar panels is highly effective but businesses considering the move on their commercial roofs often worry about potential issues from glare.

For example, companies near airports may want clarification of whether the intended photovoltaic (PV) solar panel installation would create problems for flights. In fact, airport managers and other planning authorities, including highways and rail often require professional assessments.

These surveys are designed to accurately describe the potential glint and glare impacts of a solar PV project and if needed can help in the planning application process.

Light reflected off smooth surfaces can be brief and intense (glint) or milder and more sustained (glare). Both forms are viewed as having potential impacts in aviation through distracting the pilot or air-traffic controllers.

However, while aviation in general is covered within FAA guidance from the United States, this is not strictly applicable within the UK, nor officially endorsed by the Civil Aviation Authority.

And there are no EU provisions or requirements from the European Aviation Safety Agency  concerning solar PV developments on or near aerodromes.

The CAA’s expectation is that solar PV developments are managed by aerodromes in line with established statutory safeguarding arrangements and local planning authority policy. 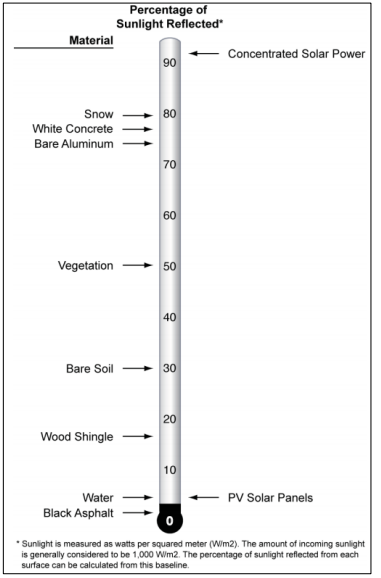 And the FAA view is:

“Solar PV employs glass panels are designed to maximise absorption and minimise reflection to increase electricity production efficiency. To limit reflection, solar PV panels are constructed of dark, light-absorbing materials and covered with an anti-reflective coating. Today’s panels reflect as little as 2% of the incoming sunlight.”

The FAA view is that current solar panels reflect a little more light than black asphalt, about level with bodies of water, and much below bare soil, vegetation, rooftops, glass, snow or metal.

But it does caution that “because the panels are a flat, polished surface, it is a reasonable assumption that most of the light is reflected in a specular way” so potentially having an impact on the eyes”.

“Solar installations are presently operating at a number of airports including megawatt-sized solar facilities covering multiple acres. To date, there have been no serious complaints from pilots or air traffic control due to glare impacts from existing airport solar PV installations.

“The anecdotal evidence suggests that either significant glare is not occurring during times of operation or if glare is occurring, it is not a negative effect and is a minor part of the landscape to which pilots and tower personnel are exposed.”

A detailed US study on the impacts of energy technologies on airports and aviation concluded that solar panels are less reflective than water, wood shingle or even bare soil.

And a Solar Trade Association (STA) report found “ no examples of issues or sustained complaints arising on grounds of pilot distraction”. It had found evidence of complaints from air traffic controllers, one from an installation at Manchester-Boston regional airport in New Hampshire, which was resolved.

One expert consulted for the report noted that from over 200 glint and glare assessments on solar PV proposals, conducted for UK airports and developers, none had been refused planning permission, although some required elements of redesign.

The report advises that there are PV solar installations in or around at least seven UK airports and one is a 2.5MW solar array operating under the direct flight path at Stansted.

The airports with solar PV include:

The image below shows six operational ground mounted solar PV assets within a 25 kilometre radius of Stansted airport, three directly under the flight path to the north east of the runway. 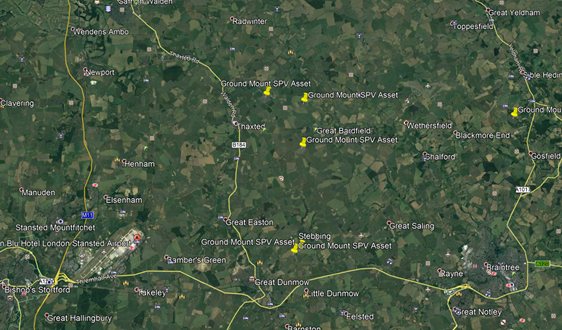 Various glint and glare assessments on the impact of solar PV projects near major roads and rail also indicate that there are no significant safety issues.

For example, one assessment for a large development on a farm in Cambridgeshire, found that glare and glint issues from the panels were not an issue. It noted that road users encounter glint or glare regularly with reflections from wet roads, glass, water and at night from headlights.

No cause for concern

The STA and other reports indicate that there is no cause for concern around the impact of glint and glare from solar PV, given the very low reflective capabilities of the current technology. At the same time, the studies emphasise the need for vigilance and continued assessment.

Want to learn more about solar and how it can help your business? You can find a wealth of information on our Solar PV page.