Since Greta Thunberg, the young climate change activist, visited UK parliament Britons have become more worried about the environment than they are the economy, crime and immigration.

This the second time in five years that concern about the environment has spiked. Back in 2014 when the UK suffered with horrendous flooding, concern rose rapidly but it fell just as quickly once the flooding had cleared.

However, this time the spike has come after a few years of a continuous growth in concern and it’s not likely to drop as sharply as in 2014. 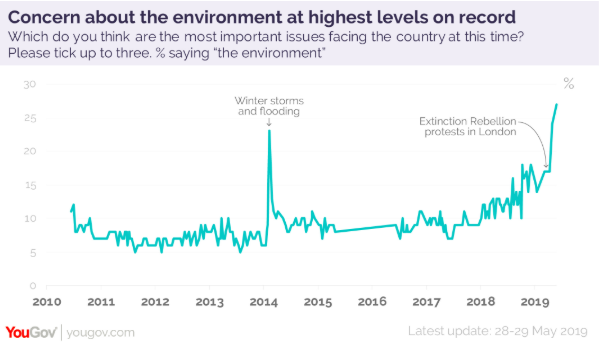 Those aged between 18-24 placed a higher concern (almost 50%) on the environment than that of the general populations (27%).

Jonathan Bartley, the co-leader of the Green party, said: “Nearly half of the young people of the UK are putting the environment among their top concerns, and no wonder. They can see governments making decisions about their future that take no account of our climate emergency.”

Receive a weekly email with the latest sustainability news