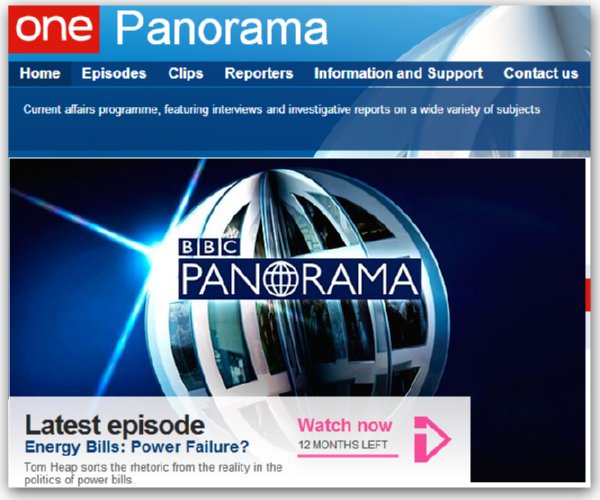 Reporter Tom Heap presented the strongest case for the urgent and unavoidable need to Cut Consumption, Cut Bills, Cut Carbon, which we have been campaigning for all year.

That is clear from our own domestic customers, and the surge in enquiries we are experiencing is testament to the harsh reality that consumers understand – energy prices cannot be contained, will go on rising fast. Action to cut energy (and water) consumption is an absolute necessity.

The Panorama programme also echoed the energy themes that we have shared on the SaveMoneyCutCarbon blog throughout 2013 – particularly the positive news that cutting consumption, cutting bills and cutting carbon emissions is neither expensive, nor difficult.

LED lighting and water/heat saving solutions, like EcoSmart shower heads, eco taps and tap aerators do deliver on their promise to help people use substantially less energy and water.

As we’ve advised, a typical UK household that installs LED lighting, eco shower heads, eco taps and tap aerators would save around £650 a year on their energy and water bills.

A wholehearted national campaign supported by the Government that goes way beyond current policies like the Green Deal is needed now more than ever. The Coalition appears aware of the benefits, at least for business.

Take, for example, Danny Alexander, Secretary to the Treasury. Tucked away among the energy plans announced as part of the national infrastructure plan last Thursday, was the news that the Government is replacing all lighting in NCP car parks with energy-saving LED lighting.

It’s a sign of these confused times that the Opposition sneered at this welcome move but we are clear that UK-wide lighting refits in homes and businesses are central to any long-term energy strategy.

The dismissive remarks in response to Danny Alexander’s lighting plans do illuminate a current issue, though. For some inexplicable reason, until recently, the idea of LED lighting refits was seen as unimportant, irrelevant even. No longer.

Without wholesale national adoption of energy and water saving solutions in the home and in businesses, we will rapidly reach a crisis. Some say it is already here and that we are merely papering over the cracks.

The Panorama programme bluntly delineated the looming shortage of energy, particularly through the National Grid, with the stark warning that shortly we will face power cuts and black outs.

This is also something we have also written about extensively this year, aware that production capacity has been seriously reduced in a bid to meet EU carbon reduction requirements.

That is yet one more reason for domestic consumers and companies to invest in LED lighting and water/heat saving solutions. We all want to keep the lights on and that means taking the strain of the Grid.

Tom Heap also reports that, across the energy sector spectrum, experts emphasise a cold and unpalatable fact – the cost of energy will rise inexorably and quickly. Some forecasts predict a doubling of the price within seven years.

This is simply because the costs of production from renewable energy sources, the necessity to commit to reducing carbon emissions and the need to maintain interest in energy investment through adequate financial return can only drive rapid price increases.

The Panorama programme is worth 30 minutes of your time and if you want to find out exactly how you can cut consumption, cut bills and cut carbon, call us on 0333 123 5464.