We’ve just been watching an astonishing video of a TED talk given recently by Alex Laskey, co-founder and President of Opower.

You may know that Opower is a game-changing energy management software company, launched in 2007, and which is transforming the way consumers save energy – through peer pressure. I hesitate to use the word “awesome” but in this case, it’s justified.

What Alex and his founding partner, CEO Daniel Yates have achieved is unique. They started a company from a rented desk in San Francisco five years ago, built it into an operation spanning seven countries across three continents and have helped 18 million customers (and growing) to reduce their electricity consumption by 2 terawatt hours (TWh), saving more than $250 million at the same time.

Reducing energy user, saving money and cutting carbon are the reason we exist as a company and we share the green goals embodied in Opower. Our focus is on helping consumers find the right energy and water-saving solutions, and we also partner with companies that want to do the same.

We believe that practical demonstration and peer pressure are the two most effective ways of generating changes in behaviour. We work with a wide range of clients in different industries and we know, for example that in the hospitality sector, it is not easy to change guest behaviour, despite the positive response to re-using towels to cut down on laundry.

This is why we focus on solutions which do not require a change in user behaviour yet make a significant impact on consumption and costs. What Opower does has a touch of genius about it – using behavioural psychology to encourage people to cut energy use. I’d urge you to take just 10 minutes to watch Alex’s TED talk – just click on the image. 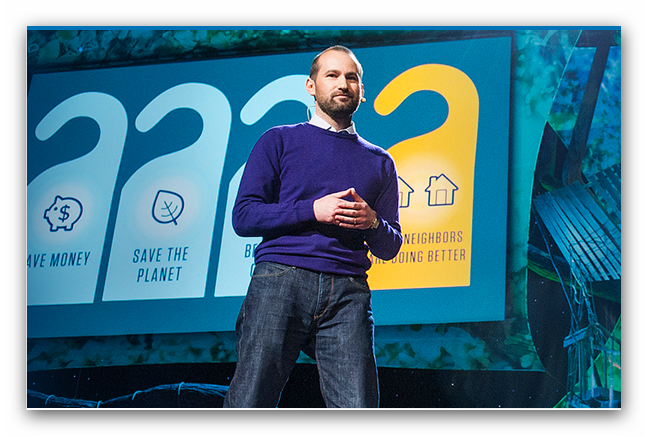 But here’s a flavour of what you will learn: For every unit of energy we use, we waste nine. How can we get people to start paying attention to their energy use and stop wasting so much of it?

Alex says the answer comes from a behavioural science experiment “that was run one hot summer, 10 years ago in San Marcos, California”. Graduate students put signs on every door in a neighbourhood, asking people to turn off their air conditioning and turn on their fans.

A quarter of the homes received a money saving message; another group got an environmental message and a third group got a message about being good citizens, preventing blackouts. None of these messages worked. They had zero impact on energy consumption.

This one worked! The people who received this message showed a marked decrease in energy consumption simply by being told what their neighbours were doing.

Alex says: “So what does this tell us? Well, if something is inconvenient, even if we believe in it, moral suasion, financial incentives, don’t do much to move us – but social pressure, that’s powerful stuff. And harnessed correctly, it can be a powerful force for good. In fact, it already is.”

That behavioural experiment inspired Alex and Dan to found Opower, create the software and partner with utility companies who wanted to help their customers save energy. Opower delivers personalised home energy reports (paper, mobile app, web) that show people how their consumption compares to their neighbours in similar-sized homes with targeted recommendations to help them save energy.

It has added a controllable thermostat to the solutions package. The Opower team say that they are been running the largest behavioral science experiment in the world. It certainly seems to be producing the best results and, as Will Nichols at BusinessGreen says, it’s made reducing energy, saving money and cutting carbon emissions fun.

In fact, Opower picked up the Green Game-Changers Innovation of the Year gong at the recent BusinessGreen Leaders Awards.

Opower is also doing something that we salute – making energy bills comprehensible, simple, transparent. Big cheer for that improvement. Will Nicols writes: “Opower’s goal is to harness the functionality of emerging smart grid and smart meter technologies to provide people with much more frequent information on their energy use and then gently encourage them to curb their usage.”

Opower is currently working with First Utility in the UK, to offer its platform to their customers and we’ll keep you posted as the company signs up more energy partners here. It is busy in Scandinavia, Asia and the Middle East as well.

Will Nichols offers a telling quote from Nandini Basuthakur, senior vice president and managing director for Europe, Middle East, and Africa which really puts the Opower offering in perspective. He writes: “The standard 1.5 to three per cent customer savings correlates with the 1.5 per cent annual savings specified by the EU’s Energy Efficiency Directive, which demonstrates the potential impact this side of the Atlantic.

“The EU is aiming for 20 per cent cut on 2005 energy efficiency levels by the end of the decade, but Basuthakur thinks it can be more ambitious, potentially shaving 10 per cent off its €500bn fuel bill through simple behaviour change measures: ’10 per cent may not sound a lot until you consider €50bn is Cyprus’ national debt,’ she says.

“It’s just behaviour – leaving lights or computers on, for example. We don’t need to do anything huge, just nudges.”

You can find out more about Opower on its website and engage with the company on Twitter, and LinkedIn and but I’ll leave the last word for now to Alex: “We’re just one company, and this is just scratching the surface. Twenty per cent of the electricity in homes is wasted, and when I say wasted, I don’t mean that people have inefficient lightbulbs. They may. I mean we leave the lights on in empty rooms, and we leave the air conditioning on when nobody’s home. That’s 40 billion dollars a year wasted on electricity that does not contribute to our well-being but does contribute to climate change. That’s $40 billion – with a B – every year in the U.S. alone. That’s half our coal usage right there.”